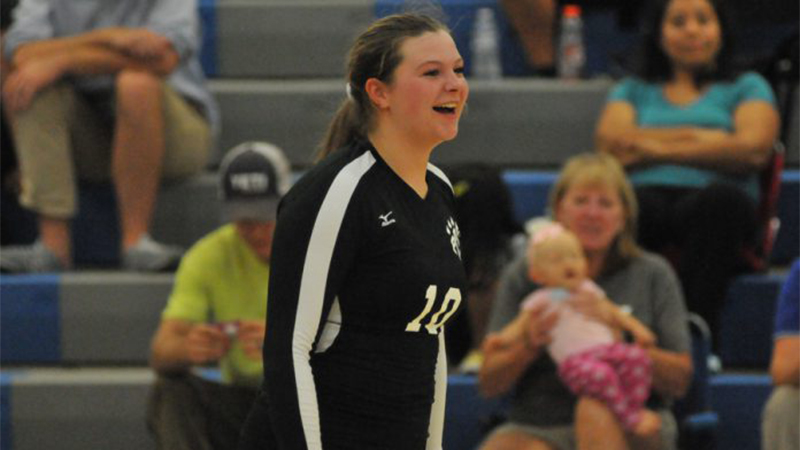 The ultimate hit, according to Polk County’s Reagan Waddell, is a perfect mix of power and speed, a kill that is already rebounding off the floor before the defense is even ready to try to stop it.

“The perfect hit, I get a set a little close to the net. Depending upon what I’m thinking, down the line or wherever, I get that snap on the ball and it goes straight down, around the 10-foot line,” Waddell said.

“Basically, it’s that speed and power, to see it hit the 10-foot line with speed, that’s when I know it’s a perfect hit.”

Waddell should know – she’s had quite a few of them in her Polk County career.

The Wolverine senior hammered home the 1,000th kill of her career during Tuesday’s match with Owen, highlighting a 25-19, 25-15, 25-18 win over the Warhorses in Western Highlands Conference action at Polk.

The moment everyone on Polk County’s bench anticipated from the start of the match came late in the second set as Waddell, from the back row, blasted a hit that clipped the top of the net, kicked sideways and fell to Owen’s side of the court. Teammates immediately surrounded Waddell, who received a ceremonial game ball from head coach Molly Hill.

It marked the second such ceremony this season for Waddell, who reached 1,000 career digs earlier this year. The double-grand is rare for any high school player, especially one whose forte is as an outside hitter.

“It’s a really big deal,” Hill said. “It’s rare to reach 1,000 in any category, but to do it in two categories is awesome. It reflects the kind of athlete she is and the player she has been for four years.

“She’s so powerful and so smart. She knows she doesn’t have to swing hard every time. She tips some, she rolls some, she looks to put the ball in an open spot. She also listens well. I can put a mark on the floor and tell her to hit it and she will hit it every time. She’s just a good all-around smart player.”

Reaching 1,000 digs proved nice, Waddell admits, but getting to four digits in kills has been her focus this season.

“To be honest, 1,000 kills are better, of course,” Waddell said with her ever-present smile. “I’ve always been a hitter. Surprisingly, the first position I started at was setter, when I was 12. But then they realized how tall I was and said, you’ll be a hitter.

“I knew I was going to hit it (Tuesday night), but I didn’t know when, so I was focused on that. I was really nervous at first. Once I hit it, then I relaxed and could focus more on the game situation.”

Unlike a dig, which is largely an individual statistic, a kill typically involves the right pass from a teammate, and Waddell noted that setters such as current teammates Lauren Ketwitz and Sydney Waldman played a vital role in her accomplishment.

It has been a season of notable accomplishments for Polk County, with Waddell’s dual thousands and Kendall Hall surpassing 2,000 digs. But the Wolverine senior captain has a much larger goal in mind to close out her steller career.

“State. I want us to go all the way,” Waddell said. “At the beginning of the season, I knew that of any team we’ve had here in my four years, this was the best chance to go to state.