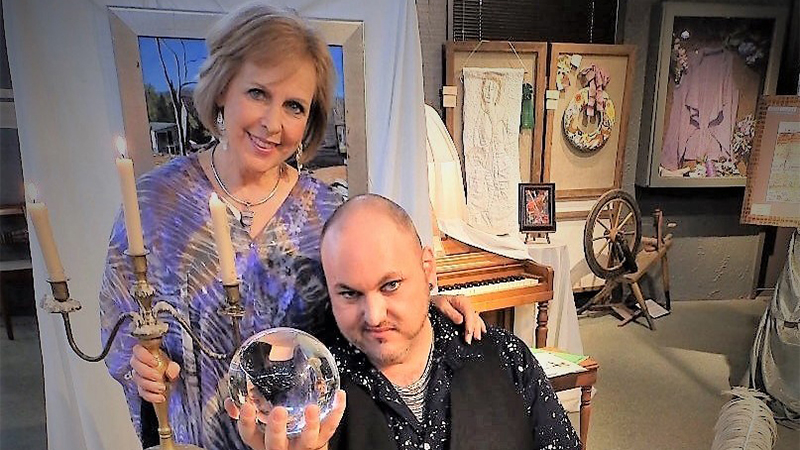 The door slams shut. The lock clicks. “No!” You claw at the lock. It doesn’t budge. Your finger stings. You feel wetness where your nail tore off. The house plunges into darkness. A hand rests on your shoulder, the other curls around your throat. A soft breath against your ear. “Let’s play.”

Way back in June, in order to promote the craft and heritage of storytelling, Tryon Arts & Crafts School created its first short story competition, The Apparitionist National Ghost Story Competition. Due on Sept. 1, the entries, like the excerpt above, poured in all summer from as far away as Utah, Arizona, Washington, Maryland and Texas. The three winning stories will be read on Halloween evening between 7 and 9 p.m. at the closing of the school’s dramatic Black & White Gallery Show.

The competition rules were that the story had to include “a ghost, spirit, paranormal activity, mysterious circumstance or folklore tale that could be perceived as a ghost story.” The story had to be previously unpublished.

In addition to prizes of $200, $100 and $50, the contest also has a “Heritage Award” to be awarded to a local writer in Polk County, N.C. (The winner of the Heritage Award is also eligible for the top awards as well.) Judging was blind for the competition, and finalists will be announced in mid-October on TACS’ website and in publicity.

Tryon Arts & Crafts staff, including summer student intern Megan Hormell, rated the stories for originality, writing craft, scare tactic, creativity and setting, leading to some lively discussions over the merits of each story.

The staff at TACS chose the 15 top stories from the dozens received to go to the preliminary judges Dottie Jean Kirk, Lee Stockwell and Katie Winkler, and that team pared those down to the top eight stories for head judge Jack Sholder’s final ruling.

“Storytelling is a craft that I would like to cultivate here at TACS,” explained Fischer. “I have scheduled some interesting workshops in conjunction with the competition in the coming months, such as ‘Haunting the Mansion: Building Suspense through Setting, Description and Character Development,’ a writing workshop with Katie Winkler on Oct. 22, 1-5 p.m., and a workshop with Dottie Jean Kirk, ‘Our Narrative Lives/Telling Our Stories,’ to be scheduled in January.”

Kai Elijah Hamilton will also be leading an acting workshop entitled, “Fear Portrayal” on Oct. 20 from 6-9 p.m. For additional information on any of the workshops visit tryonartsandcrafts.org/workshops or call 828-859-8323.

The staff at Tryon Arts & Crafts School invites you to join them on Oct. 31 for the Black & White Gallery Show and the reading of the top three stories. Be prepared to experience some chills and thrills! •

A sampling of teasers from writers’ submissions…

Greer, S.C. – “A nervous fluttering began in Bobby’s gut, and a tingling spread across his skin. A feeling he associated with horror movies watched late at night with all the lights out.”

Philadelphia, Pa. – “His skull ballooned to its greatest point of expanse; the next sound surely would be the one to cause the explosion, to send his thoughts, his sanity sprayed across the room. Would that end the incessant, pulsing, raging sound that lived and thrived in his ears, and yes and everywhere within him?”

Mountlake Terrace, Wash. – “From the bed I could see Dead Hasil by his dead fire, staring at me hard and shameless. It seemed my parched skin was the only kindling left in our world and I feared Dead Hasil would now toss me on the fire. That’s when I knew it was the Devil that claimed the drifting soul of Hasil so many months ago, and now the Devil now came for me.”