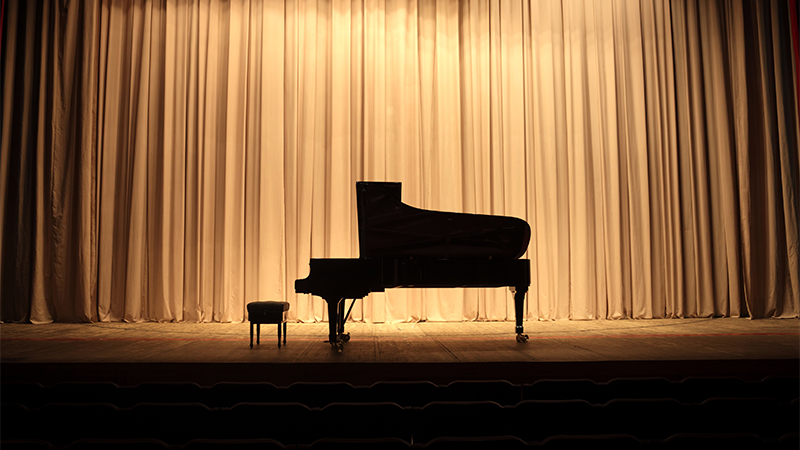 I was just a warm body sitting on the piano bench so the photographer could adjust the lighting while we waited for the real pianist to arrive. The grand piano was brand spanking new, just received from Europe with a price tag of $30,000-plus. It was beautifully black and so reflective the photographer was complaining. So far, the keys had only been touched by the piano tuner. And I couldn’t help but wonder, what if…

Actually, there were supposed to be three pianists, all accomplished, noted, and world-class, and we were gathering for a photo shoot in a warehouse in Hendersonville. Two out of three had arrived, but this being Eclipse Day, the traffic was clogged, and the third guy was stuck on the interstate.

I was assigned to write the feature story about these men playing some nearly 300-year-old music written for three pianos — three pianos at one time, plus the support of a chamber orchestra. It was pretty highbrow stuff; pretty cool, too. The publication had staffing issues, and I volunteered to help find a freelance photographer. Going beyond the call of duty, I convinced a photographer friend to take the photos.

As we waited, the two pianists practiced and talked shop, and my photographer friend turned lights on and off, moved people from here to there, and endlessly adjusted the settings on his digital camera. I just sat there. Hearing the two pianists play only two thirds of the Baroque nine-voice music was still amazing. They would play and stop and talk about trills, grace notes, measures, codas, and other musical technicalities that I could only begin to understand.

“Steve, will you slide a little to left and sit up straight? Put your hands on the keyboard like you are playing.” Sure, I’ll pretend to be a concert pianist.

Once upon a time, I had given serious consideration to a career in music, specializing in piano performance. I had taken piano lessons as a child, and once in high school, I thought I was getting pretty good at it. I was almost good enough to play hymns at church. Almost.

But almost doesn’t cut it in the world of professional music, and my nice old piano teacher had failed to tell me that. She just kept sticking little gold stars on the sheet music that I labored to read. I had started out with an old second-hand upright piano that we stowed in the garage. That is where I practiced until Mother felt I was serious enough for her buy me a new spinet that would overcrowd our small living room. For endless hours, I would practice to get my gold star each week.

It wasn’t until I tried to take piano lessons from a college professor and a college-level music theory class that I finally figured out the hard truth — I didn’t have a single lick of a talent. (And college professors don’t have a lick of patience for no-talent teenagers.)

At best, I could read “easy” sheet music and practice for weeks, and maybe – just maybe – the music might be bearable. That is when I switched from the piano keyboard to the typewriter, from music to words. However, that spinet piano has haunted me to this day, now having sat in the exact same spot in my living room for the past 28 years. Even spinet pianos are too heavy to move for vacuuming, and we’re afraid the dust bunnies may have mutated.

I don’t think I’ve touched the fake ivories since my kids were little and we tried to sing Christmas carols. If I could have played Jingle Bells maybe my kids would still believe in Santa Claus. Ironically, my wife has recently suggested that maybe it’s time to get rid of the piano (and the dust bunnies) and use that wall space for something useful, like a bookcase. I think she might be right.

Eventually, the third pianist arrived with tux in tow, and I was relieved of my bench warming duties. I could go back to observing and note taking, the photographer could take the group shot, and the three pianists could produce music that I could only appreciate from afar. Bach’s Three-Piano Concerto No. 1 in D Minor is a masterpiece of Baroque complexity. The nine voices weave in and out of each other’s way, creating melodies in endless variation. As a listener, I can only hope to understand its beauty in the most naive way.

Oh, to rightfully sit at one of those grand pianos and mind-meld with fellow musicians in pursuit of musical excellence. Oh, to get that darn spinet piano out of my living room to make room for more books. What is that?

Steve Wong is a writer living in the peach orchards of Gramling, S.C. He is always looking for something interesting to write about and loves feedback about his work. He can be reached at Just4Wong@Gmail.com or 864-316-6559.