A Brit in our Midst 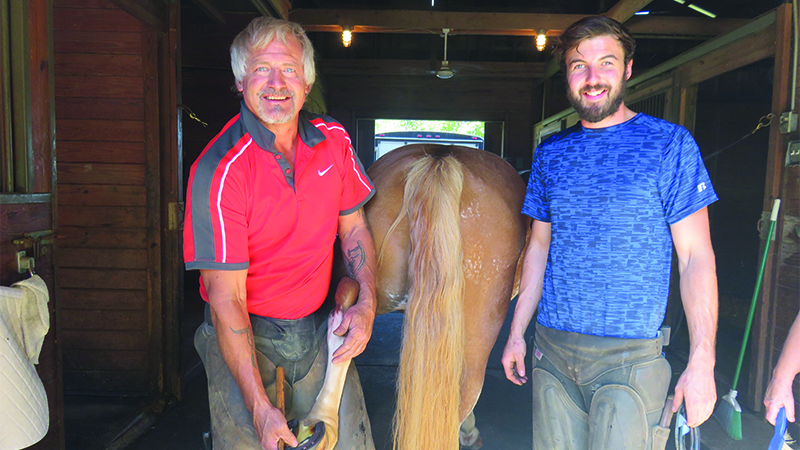 Even among the diverse group of farriers we have working in the Carolina Foothills, there are several things that set Tom Holliday apart. First he didn’t grow up around here: he’s from Melton Mowbray in Leicestershire, England, a market town with farming and foxhunting traditions. He’s also young compared to our average population – just 23. And he’s a graduate of the very rigorous system of study, apprenticeship and certification developed by Great Britain’s Worshipful Company of Farriers (WCF), which was established in the year 1356 a.d. and given a Royal Charter of Incorporation in 1674 (see pg. 56).

Tom spent his boyhood around horses, starting with a Shetland pony and then riding a variety of breeds. His father was a huntsman, so naturally Tom hunted a lot. He also developed an early and enduring interest in farriery: “I always wanted to be a farrier,” he says. That began with his grandfather, who trained as a farrier in the army and then did all his own shoeing for the Appaloosa stud farm he owned.

Tom’s riding was curtailed as a teenager when he spent several years between Germany and Northern Ireland, where the family followed his stepfather’s army career. After finishing high school in Germany, Tom applied to the WCF certification program.

His first step was a pre-farrier course (forging) at Herefordshire College of Technology, and he then completed the required apprenticeship with an Approved Training Farrier (ATF), in Shropshire, England. He now has his Diploma from the WCF, which is the first of three levels of accreditation; the second and third are Associate and then Approved Training Farrier. If Tom hadn’t passed his exam for the “Dip-WCF” level, he’d have been pushed back in his training for six months before getting to try again.

For longer than Tom has been alive, Jeff Pauley has been a farrier in the Carolinas, starting in 1989 in Burnsville, N.C. His primary career was in engineering for the Rockwell Corporation in Weaverville, and he got interested in farriery through his hobby of competitive roping. “I watched the farrier work and liked what he did so much that I took a leave of absence from work to attend farrier school,” he says. After starting farriery part-time he turned it into a full-time career in 2002.

Jeff has continued improving his skills through clinics and peer review. That included earning his Certified Journeyman Farrier designation, the highest awarded by the American Farrier’s Association.

Because he had that certification with the AFA, Jeff became eligible to test for the “Associate” level of Britain’s Worshipful Company of Farriers. That’s the second highest of the WCF’s certifications, signifying that a farrier is qualified to do therapeutic work on horses being brought back from injury or other condition of health.

“When the WCF expanded its availability of programs to the U.S., they would occasionally come over to test candidates if there was enough interest,” he says. “I talked a bunch of people into testing five years ago, so the WCF came to Lexington, Kentucky, and that’s when I got certified. At that time there were about 10 U.S. farriers with that designation and now there are about 20.”

Since many of his shoeing clients lived in the Foothills, Jeff moved from Burnsville to Landrum three years ago. He has clients in various disciplines, including about 25 percent who compete in the sport of endurance. Jeff has been the team farrier for the U.S. Endurance Team at the 2006 World Equestrian Games (WEG) in Germany; the 2008 World Championships (Malaysia); and the 2010 WEG-Kentucky.

Jeff has also been a speaker at the American Endurance Riding Conference’s national convention, as well as for local equestrian groups, and has been a clinician since 2009 for farrier and hoofcare product supplier Delta/Mustad, across the U.S. and as far as Colombia, South America.

How the Paths Crossed

Through Jeff’s connection with the AFA and WCF, he got involved in the joint Exchange Program between the two organizations. During the exchange, participants cross the pond to spend a week each with several farriers in different locations, and Jeff hosted Tom for a week last summer. “Tom liked our area and went through the process of getting his visa, so now he’ll be working with me for a year,” Jeff reports.

Since Tom’s arrival in Landrum this summer, he’s fitting right in with the horses and horse people he’s come to know here and likes it so much he just might stay. And that might include working with Jeff for the U.S. endurance team at the 2018 WEG.

Tom says the thing he’s found most surprising about the U.S. so far is, “You don’t have to have a qualification to be a farrier. You have to have one to cut someone’s hair but not to work on someone’s horse, where you could possibly lame it.”

Tom doesn’t intend to specialize in shoeing for a particular discipline, saying “I like the variety of working with all kinds, from drafts and hunting horses to kids’ ponies.”

Tom will be in our midst for a while, so if you’re out and about and catch the sound of his unmistakable accent or recognize him from his pictures here, please give him a warm “Horse Country” welcome. We’re blessed to have great farriers in our area and it’s nice to add another.

Horses have always been an important part of Great Britain’s history and culture, so it’s not surprising that the first association of farriers was started there 660 years ago. But the Worshipful Company of Farriers (WCF) is far from a relic of Great Britain’s past; it plays an important role in the lives and care of horses there today.

Under the act, the WCF was given the general responsibility for securing adequate standards of competence and conduct among farriers, together with the advancement of the art and science of farriery and education in connection with it.

The Farriers Registration Council was set up to maintain a Register of Farriers and to determine who is qualified to register therein. Only registered farriers, approved apprentices, qualified and trainee veterinary surgeons, and persons carrying out first aid in an emergency may legally practice farriery.

In Great Britain, illegal farriery is a criminal offense, possibly resulting in court appearances, a criminal record and a fine of up to £1,000 and costs. •

Judy Heinrich is a freelance writer serving national clients in diverse industries. Judy writes for the Tryon Daily Bulletin and Foothills Magazine on all things horse related. She can be reached at jheinr@windstream.net.