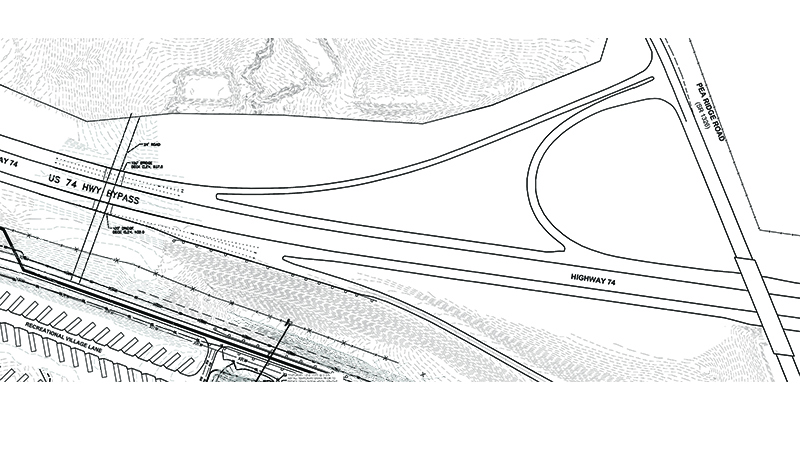 The Polk County Board of Commissioners met Sept. 18 and heard from the Smiths as well as approved a resolution in support of TIEC receiving state funding for road improvements to prepare for the World Equestrian Games (WEG) next September.

Jennie Smith said the activities at TIEC continue to increase and the lower end of Pea Ridge Road, which has 38 homes and a church, is experiencing more traffic.

“A neighborhood which some residents enjoy walking is now faced with wide horse trailers that force them off the road in order for the trailers to pass or while meeting another wide trailer,” Jennie Smith said.

Jennie Smith said Pea Ridge Road should not be used as a shortcut for wide, heavy horse trailers.

She also said the neighborhood was established in the late 1940s and early 1950s and widening that section of Pea Ridge Road would take away frontage that would prevent family gatherings and parking for residents as well as parking and room for large events at the church.

“This is the largest rural African-American neighborhood in Polk County,” said Jennie Smith, “enjoying the rich legacy left by our forefathers and foremothers. Let Polk County be a model county for rural residential neighborhood survival during this vast economic expansion and not another gentrification project like Hilton Head and Pinehurst. Success is diversity.”

The Smiths thanked the NCDOT for lowering the speed limit from 45 mph to 35 mph and recommended appropriate signage be placed on the road to indicate that no heavy, wide trucks be allowed.

Commissioner chair Tommy Melton asked if people are coming off Hwy. 14 and I-26 to come the back way to the equestrian center.

Jennie Smith said some arrive via Sandy Plains Road and Pea Ridge Road. She said last week there was an accident with two trucks.

“It’s not safe, we understand that,” Pittman said.

Commissioner Jake Johnson said if the GPS gets fixed he thinks that will really cut down on people driving on Pea Ridge Road.

“They probably don’t know,” Johnson said. “It’s just where the GPS is taking them.”

Pittman said it’s very important to the county and they are working on it.

Gasperson said in Landrum there is a shortcut to FENCE and there is signage prohibiting using the road with horses and trailers.

Pittman said he would reach out to the NCDOT and see what he can find out about signs.

Pittman said there are definitely things that can be done with GPS. Most people, Pittman said, just check the fastest route and that’s what gets them on these two-lane roads.

TIEC Chief Operating Officer Sharon Decker attended the meeting and said TIEC has been working very closely with the NCDPT, Homeland Security and federal roadway officials on how they can better manage horse trailers and tour buses.

Decker said the roundabouts on I-26 are small, and there are numerous accidents. She thinks once the new ramps off I-26 to Hwy. 74 are complete there will be no motivation to exit that corridor.

Decker showed a conceptual map that has been shared with the NCDOT where trailers will come to the new roundabout, then go onto Pea Ridge Road then to an underpass, where TIEC will check them in and they go back to the underpass to park.

“It will reduce the amount of traffic that circles around in our neighborhoods,” Decker said. “We are going to bring all the horse trailer and bus traffic in that entrance.”

Decker also said it’s a safety issue and a volume management issue. She said the NCDOT has monies in an economic development fund and the resolution is to allow the county to receive those funds. TIEC will be putting private funds to satisfy the matching requirement to the grant.

Gasperson asked if the county will have to handle the money.

Decker said the state will actually do the work. Pittman added that he’s never seen the county have to manage NCDOT money.

Decker said the project will be done in four and a half months. The project is expected to start after the first of the year, with it being completed by the end of July 2018, according to Decker.

Johnson said he’s vastly in favor of this project. He said it is taxpayer money but historically state funding doesn’t come to Polk County.

“It’s no county money,” Johnson said. “It is money they are paying in taxes but it would be going to somewhere else in the state if not here.”

“We have the same concern our neighbors have,” Decker said. “We travel the same streets going to our homes at night. It’s important to protect our neighborhoods in the process.”

Decker mentioned a sign she saw recently that said, “Drive on our street like your children live here.”

Commissioners approved the resolution for state funding for road improvements. (See page ____ for the full text.)

Following is the letter in its entirety originally sent to county commissioner Ray Gasperson from Franklin and Jennie Smith:

While the activities of the Tryon International Equestrian Center (TIEC) continue to increase, the lower end of Pea Ridge Road from Coxe Road – a neighborhood of 38 homes and a church – has been experiencing more traffic, not only cars, but wide horse trailers, in a 45 mph speed limit zone.

neighborhood which some residents enjoy walking is now faced with wide horse trailers that force them off the road in order for the trailers to pass or while meeting another wide trailer. Personally, while driving home meeting a trailer (driving on the yellow middle line), I would stop and allow the trailer to pass me while their wheels were on the grass to pass safely in their lane.

While traffic (cars) is expected to increase, the lower part of Pea Ridge Road should not be used as a shortcut for wide heavy horse trailers en route to the TIEC. Sandy Plains Road and Coxe Road to Union Road exit were widened and upgraded to handle heavy weight vehicles.

In a neighborhood established in the late 1940s and early 1950s, to widen this area of Pea Ridge Road would take away footage that would prevent front yard family gatherings and residents parking – as well as church parking for large events (funerals, etc.). This is the largest rural African-American neighborhood in Polk County – enjoying the rich legacy left by our forefathers and foremothers.

Let Polk County be a “model county” for “rural residential neighborhood survival” during this “vast economic expansion” and not another gentrification project like Hilton Head and Pinehurst. Success is diversity. “True” unity is diversity … including each township as well as each “rural neighborhood” in the proximity of the TIEC.

Without diversity there is no unity.

Thanks to the Department of Transportation for lowering the speed limit from 45 mph to 35 mph (lower part of Pea Ridge Road from intersection of Coxe Road and Sandy Plains Road to the 74 overpass).

There are many hidden driveways in this neighborhood of 38 homes, as all houses cannot be seen from Pea Ridge Road. Also, this is a school bus route.

It is unsafe to retrieve mail from boxes. We have experienced a vehicle knocking down our mailbox because of speed.

That appropriate signage be used to indicate no heavy weight wide trucks. This should be police enforced, especially during special events.

WHEREAS, Polk County is committed to advancing and promoting Economic Development in Polk County, and

WHEREAS, Polk County considers public safety a top priority and consideration in all public and private projects, and

WHEREAS, Polk County pronounces, if the NCDOT funds roadway improvements in support of the TIEC travel demands, the County will not be required to commit any matching funds toward the project;

NOW, THEREFORE, BE IT RESOLVED, the Board of Commissioners of Polk County do hereby support the North Carolina Department of Transportation for roadway improvement funding for the World Equestrian Games.