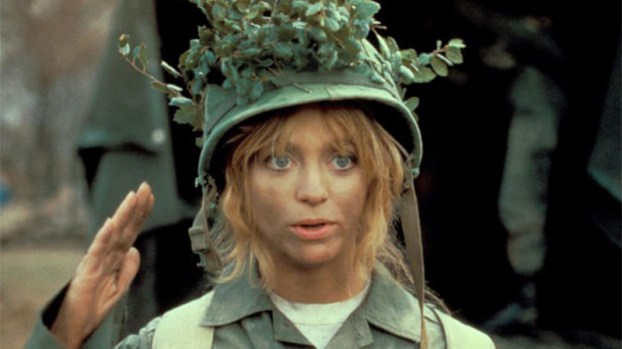 Goldie Hawn in “Private Benjamin” kicks off the 2017-2018 Film Series at TFAC on Tuesday, October 3. (photo submitted by Michelle Fleming)

Tryon Fine Arts Center begins the new season of their film series with the screening of “Private Benjamin” on Tuesday, Oct. 3 at 7 p.m.

This season they are featuring films starring some of Hollywood’s greatest leading ladies in a varied selection of genres, beginning with the delightful Goldie Hawn comedy “Private Benjamin.”

Released in 1980, “Private Benjamin” is the story of a sheltered “princess” from a wealthy family whose dreams of a comfortable life come to a shattering end, leading to a surprising turning point in her life when she decides to join the Army, leaving her parents, Teddy (Sam Wanamaker) and Harriet (Barbara Barrie) flabbergasted as she heads to Fort Biloxi.  Both Goldie Hawn and Eileen Brennan (who plays her captain) were nominated for Oscars, as was the screenplay by Nancy Meyers, Charles Shyer, and Harvey Miller.

Movie critic Roger Ebert said of the movie:  “This is an inspired idea for a movie comedy, and Goldie Hawn has a lot of fun with it. She finds just the right note for her performance, poised halfway between the avaricious and the slack-jawed, the calculating and the innocent. . . . Goldie Hawn, who is a true comic actress, makes an original, appealing character out of Judy Benjamin, and so the movie feels alive, not just an exercise in gags and situations.”

On movie night at TFAC the doors open at 6:15 to allow plenty of time for friends to meet and take advantage of the offerings at the bar.  For more information about the Leading Ladies Series and other activities at TFAC visit tryonarts.org or call 828-859-8322.

A Saturday night gospel sing will be held at Fork Creek Baptist in Saluda this Saturday, Sept. 30 at 7... read more