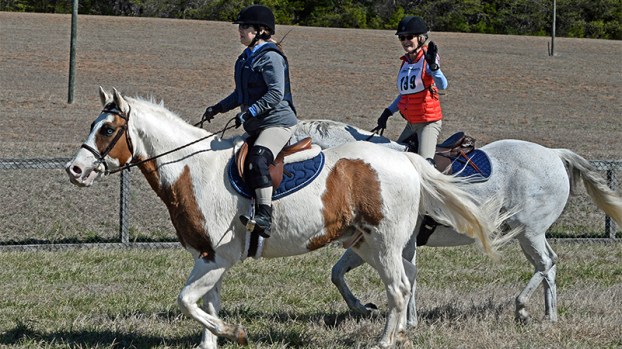 Beverly Ozmon and Debbi Stanfield, riding in the spring 2017 hunter pace at FENCE, are just two of the 100 to 150 riders that regularly participate in the Western Carolina Hunter Pace Series. (Photo by Lou Smith)

Back in stride with the Western Carolina Hunter Pace Series

Fall hunter paces are a popular social event for area riders. Starting in September, the series continues through the end of May, with the end of year awards ceremony in June.

Hunter paces originally begin as a friendly competition ridden over hunting country at “a fair hunting pace” (the pace the hounds would typically travel during a hunt). With so many trail riding enthusiasts and other riders who do not foxhunt in the area, the Western Carolina Hunter Pace Series (WCH Pace Series) decided to open a division to include all riders.

Started in the late 1980s the WCH Pace Series is possibly one of the largest in the country. According to WCH Pace Series Organizer Jan Smith, the Tryon Hounds, the Green Creek Hounds and the Greenville County Hounds originally hosted the events. Organizations such as the River Valley Pony Club and FENCE soon became involved.

Smith said the hunter paces are a wonderful way for horse people to socialize in a friendly setting and be able to ride trails that are not generally open to the public. Most events include lunch and often a “stirrup cup” (a refreshment, usually including a beverage) during the mid-way checkpoint.

The hunter paces last about 6 to 12 miles and include optional jumps. The Field Hunter division is typically for the more serious hunters who prefer to ride at a hunting pace. Many experienced foxhunters use this as an opportunity to school a green horse or rider.

Smith explained that the Trail Rider division came from the hunting term “Hill Toppers” (riders in the hunt field who choose to ride at a slower pace and not jump). The Trail Rider division appeals to those who are not as interested in traditional foxhunting and ride for an average, rather than optimal, time.

Smith added that the Tryon Hounds also offers a “wings” division, which is a fastest time over the course. “Those riders are asked to ride early in the morning to ensure the safety of the other riders,” she explained.

According to Smith, safety is an important factor for all their events. “We ask that riders be courteous and not get caught up in the competition and come barreling past other riders,” she said. “We ask everyone to remember we have green riders and green horses out there.”

WCH Pace Series also encourages all riders to wear approved helmets and requires helmets to be worn when jumping.

The hunter paces are open to all sorts of equines, including mules and donkeys. “I even saw a mother mounted on a small horse, possibly an Icelandic, leading her daughter on a mini,” she said.

Since fun is a high priority for the events, the Green Creek Hounds traditionally sponsor the Halloween hunter pace each year. Smith said riders show up in crazy costumes such as poodle skirts with the horses dressed as poodles, a horse painted to look like a Clemson Tiger and one black horse painted as a skeleton. Green Creek typically decorates the course with graveyards on the side or ghosts hanging from trees.

The cost to participate for a horse and rider ranges from $35 to $40 with many events donating proceeds to charities such as therapy and handicap riding programs, the Southeastern Children’s home or the Foothills Humane society. All events donate a portion to Polk Equine Emergency Rescue and all monies left over after end of the year expenses go to charities.

“We’re trying to organize an event to raise money for the horse farms that were damaged by Hurricane Irma,” Smith said.

To find out more about the WCH Pace Series search www.wchpace.org, check out their Facebook page at Western Carolina Hunter Pace, call 828-863-4713 or email wchpace@windstream.net.

Even though the Kruger Brothers concert at Tryon Fine Arts Center was sold-out, patrons had no trouble parking. A friendly... read more