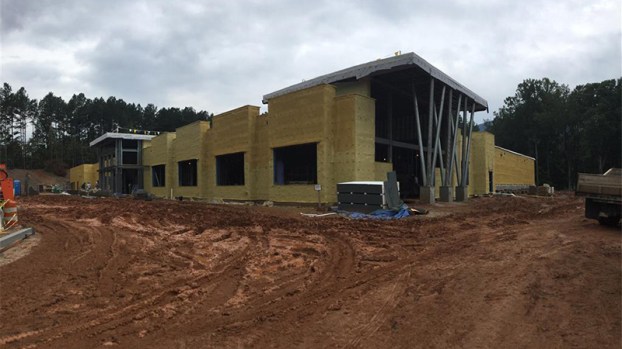 COLUMBUS – Construction on Polk County’s new jail has been pushed back by a month after the area experienced more than normal rain over the past few months.

The Polk County Board of Commissioners met Sept. 18 and heard a construction update from Paul Luzier, with Moseley Architects.

Luzier said the construction has experienced 22 days of bad weather, which has pushed the schedule from being complete this December to being complete in January 2018.

Luzier said construction is moving forward with the exterior of the building now, with the roof being started and the exterior insulation going in.

“Despite the weather, the contractor is still making good progress,” said Luzier.

An unexpected add-on to the project was also discussed, which includes an extra $10,000 due to how the framing ties the walls to the roof.

Luzier said they have been able to mitigate and manage any type of add-ons to the project and offset extra costs, but this one is the first sizable one of the project.

The county built in approximately $900,000 in contingency for the project, but that also has to pay for items like fixtures, systems and furniture.

Commissioner chair Tommy Melton asked when the jail will be open for business, assuming everything goes perfectly from here.

Polk County Captain Jerry Williams said his hopes are they will have the detention center fully staffed and ready to open by April 1, 2018.

Construction of the new law enforcement center has been ongoing since December 2016 following a ground breaking ceremony.

Polk County received a $13.5 million loan to construct the new law enforcement center, which will include a new jail and sheriff’s office, located off Hwy. 108, just outside Columbus and adjacent to Milliken.

The county purchased 19.19 acres of property adjacent to the Milliken plant just outside Columbus town limits for $1,950,000 and another 2.6 acres off Park Street for $125,000 for a total land purchase price of $2,075,000 to construct the new law enforcement center. The purchase price included site preparation for the new law enforcement center. Some of the property was purchased for future needs, such as a new courthouse and possible administrative offices.

Organization provides emergency repairs for the handicapped, those who can’t afford it Wynona O. Joye calls her new ramp a... read more