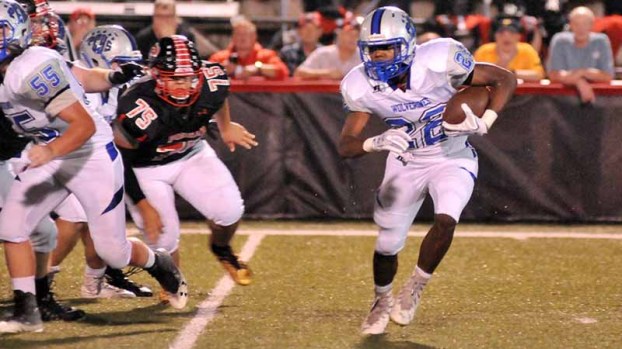 For three quarters Friday night, the Wolverines stood toe to toe and traded blows with Pisgah, keeping a usually loud home crowd in Pisgah Memorial Stadium largely subdued and making the Bears’ choice of a Homecoming opponent seem like a bad idea.

But Pisgah finally wore down Polk County, putting together a pair of long touchdowns drives in the final 18 minutes and shutting down the Wolverine offense to secure a 49-28 victory in the first meeting between the two programs. It was also Polk County’s first loss of the season after a 4-0 start.

A passing thunderstorm postponed the opening kickoff for nearly an hour and eventually pushed the end of the game to almost 11 p.m. But once the skies cleared, neither team seemed affected by the delay – a frenzied first half featured seven touchdowns and ended with Pisgah up 28-22.

Dillon Knighton tied the game early in the third period with a 61-yard interception return for a score, but that would largely be the last hurrah for Polk County (4-1) as the Wolverines were unable to generate any sustained offense. Polk had just three first downs in the second half, two of those in the final five minutes of the game.

“The second half, we just didn’t move the football,” said Polk County head coach Bruce Ollis. “They played great on defense. We had some opportunities. We had some third-and-shorts we didn’t finish. They outplayed us in the second half.

“We knew going in that if we were probably going to win this game that it would be a close ballgame and we kept it that way most of the time. I’m awfully proud of our effort. We’ve just got to play a little bit better.”

Polk County’s other problem during the night – Pisgah quarterback Tanner Wike, who rushed for 182 yards and six touchdowns. The fifth of those came with 5:59 left in the fourth quarter, ending a 10-play, 65-yard drive, all the yards coming on the ground, that put the Bears up 42-28 and largely dimmed Polk County’s hopes of leaving Canton with a signature victory.

But everything looked awfully bright for the Wolverines to that point.

Pisgah (4-2) drove for a score on its opening possession, but Polk tied the game late in the quarter. Set up at the Bear 8 by Knighton’s 36-yard punt return, the Wolverines needed just two plays to tally, with Elijah Sutton plowing in from the 3. Polk then faked the extra point, with holder Dillon Overholt standing and firing a pass to Bryson Seay for a 2-point conversion and a Wolverine 8-7 lead.

And then the fun really began.

Pisgah’s Jon Mehaffey swept around right end, sidestepped a tackler and raced 61 yards for a score on the Bears’ first offensive play after the kickoff, giving Pisgah a 14-8 lead. On Polk County’s first offensive play, Sutton took a pitch from Overholt, stopped and fired a perfect pass to Knighton, who caught the ball five yards behind the Pisgah secondary and outran all for another 61-yard touchdown play. Luis Hernandez’ extra point gave Polk a 15-14 lead.

A Braden Miller interception stopped Pisgah’s next scoring drive, and the Wolverines drove from their 17 to the Pisgah 15 before the possesion ending in a missed field goal. Pisgah answered with an 80-yard march, ending in a Wike 13-yard scamper to give the Bears a 22-15 edge with 2:28 left in the half. 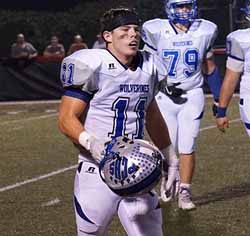 Polk County’s Dillon Knighton had two touchdowns Friday and set up a third with a long punt return.

Back came the Wolverines. Overholt scrambled for 26 yards, hit Knighton with a 16-yard pass, then followed a Seay 9-yard run with a perfect 20-yard strike to Avery Edwards in the back left corner of the end zone. Five plays, 71 yards, 1:14 off the clock and a 22-22 tie after Wyatt Derkach, subbing for an injured Hernandez, kicked the extra point.

Pisgah, though, wasn’t done, a pass interference penalty helping move the Bears in position for Wike’s 29-yard scoring scramble with 12 seconds left in the half. A missed extra point left the Bears up 28-22 at the half.

Following Knighton’s pick six, in which he perfectly read a short pass, stepped in front of the receiver and raced untouched to the end zone, the Bears began to rely on their physical offensive line and answered with a 12-play, 70-yard scoring march. Pisgah converted a pair of third downs along the way before Wike plowed in from the 6 to give the Bears a 35-28 lead with 3:35 left in the third period.

Polk would go three-and-out on its next two possessions, the Bears would score to take a two-touchdown lead and then added another score in the final minutes on Wike’s final touchdown.

“We hit the tailback pass on them early,” Ollis said. “They were coming up hard on the sweep and we thought that could be a good play for us and we wound up scoring. But that’s the first time someone has taken that play away from us. And our option game didn’t work nearly as well as we thought.

“I think it just comes down to blocking and tackling, and they did that a little bit better than we did in the second half, and thus we came out on the short end.

“One of my favorite sayings is live and learn and die and forget it all. We want to live and learn from this and get better and play a good East Rutherford team next week.”

Sarah Price, center, has starred in softball and basketball for Landrum, but on Friday night, Sept. 22, Price was selected as... read more