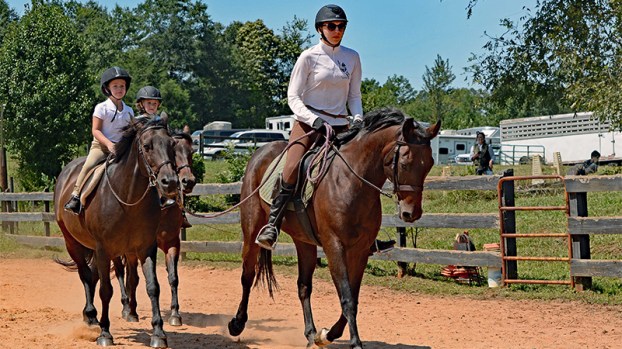 Katie Tighe, instructor at Scotsgrove, on How’s Tricks with Braelyn Williamson on Truffle and Wren Whelchel on Folly, one team of Mini-Pace riders heading out on the trail at the Scotsgrove Fall Hunter Pace held Sept. 9 for the benefit of the SE Children’s Home Therapy Riding Program

What a beautiful day for the opening Hunter Pace for the 2017-2018 Hunter Pace and Trail Ride Series! It was a pleasure to see many new faces in the crowd! The weather was fantastic at Scotsgrove and riders were eager to enjoy the ride before Irma would come to town. There were many compliments on Scotsgrove Farm, the trails, and the day.

There was much preparation involved in getting the trails ready. Lynn Fitch, Laura Ridgeway, Leslie Scott, and Scott Tate pruned, chain sawed, and mowed post haste. There were several trees that had come down that needed to be taken care of as well. The trails were marked with survey tape and Leslie and Katie Tighe reviewed and improved it.

Randy Autrey and Scott and Sherry Tate were on hand to park the trailers. Andrea Gentry, Jennifer Hilson, Gwen Phifer, and Cecilia Snyder manned the registration desk with a few reliefs coming in now and again. Unfortunately, Andrea was called to deploy to help in the impending aftermath of Hurricane Irma and had to leave. The barn was under the care of Laurie Ridgeway with Katie’s help. Katie was mentoring the Mini-Pace Riders who went to the bridge on the first loop and crossed the road and did the last loop. They were “short stirrup” riders and are new to the sport.

Timing was handled by Donia Davis, Samantha Fouse, and Lindsey Massey. Beth Straitiff catered this event with some delicious eats. On the menu were chicken salad sandwiches, egg salad sandwiches, chips, and enough veggies to make everyone happy and healthy! There were cookies and brownies to curb everyone’s sweet tooth! Cara Nelson and Beth’s parents, Judy and Don Long, helped with serving the delicious meal. Elizabeth Lister was the floater and helped where needed.

The trail was 8.4 miles. Riders and their mounts started the ride in the arena and would finish there as well. The trails lead riders through woods and out into open spaces. The Kudzu Field was well marked and is always a favorite with riders. The bridge on Grand Canyon Road that spans the North Tyger River was well marked with yellow tape and signs to ensure riders were heading in the right direction. Overlook Pasture gave riders a beautiful view of the Blue Ridge Mountains.

Riders would ride around Little Orchard and the Pine Nursery before arriving at the Check Point. Heather Daniel, AK MacMillan, Ashlan Niemitalo, and Jackie Smith were the greeters at the Check Point. Here the riders were given a cold drink and their mounts enjoyed the three minute rest. Once on their way, riders eventually made their way through New Woods and down Golightly Hill to the arena and the finish line. Series photographer Lou Smith was hanging out in the arena to take pictures, while Jan was spotted in a variety of spots on trail also with camera and long lens.

The turnout was very nice with 67 riders in 36 teams.

There was a total of 25 riders in 15 teams in the Field Hunter Division. The Optimum Time for the Field hunters was one hour, 44 minutes.

Right behind Rebecca was Diane Hicks, also from Pendleton, who had another close time of one hour, 36 minutes, 32 seconds and was awarded the fourth place spot. Fifth place honors were awarded to the duo of Christina Goen from Lyman and Emily Mitchell from Greer with the time of one hour, 35 minutes, 27 seconds. Rounding out the placements in the Field Hunter Division taking sixth place was Candice Carr from Columbus with a time of one hour, 53 minutes, four seconds.

In the Trail Rider Division, there were 36 riders in 19 Teams. The Calculated Optimum Time for this Division was two hours, 16 minutes, eight seconds.

An honorable mention nod goes to the trio of Maddie Brown, Kimberly Hannu from Landrum and Samantha Seay from Gaffney with a time of two hours, 18 minutes, 25 seconds. They were less than 30 seconds out of sixth place.

Up next for the 2017-2018 Hunter Pace Series is the Windridge Fall Hunter Pace and Trail ride on Sunday, Sept. 24 followed by the Tyron Hounds Fall Hunter Place to be held on Oct. 8. Please remember to RSVP for lunch at Windridge. It’s going to be a very nice lunch and a headcount is needed.

Check wchpace.org for upcoming events, changes, and to view your photos taken by photographer Lou Smith. With the weather being so unpredictable here of late, rain dates are in place in case of a postponement.