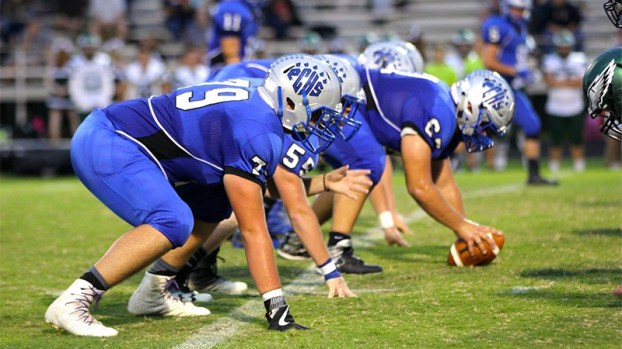 Wolverines travel to Pisgah for showdown with the Bears

Bruce Ollis has been preparing Polk County for its four-game road trip by suggesting the time away could be a preview of the postseason.

Given that, perhaps there’s no better place to begin than the always playoff-like atmosphere at Pisgah.

The Wolverines make the first trip to Canton in the program’s history on Friday, battling the Bears in a 7:30 p.m. kickoff in Pisgah Memorial Stadium.

The road trip is the first of four straight for Polk County, a scheduling fluke brought about by a combination of factors, most notably the late loss of a game with Hendersonville that forced officials to scramble to find another opponent and the decision of the Western Highlands Conference to flip its traditional schedule, bringing the back-to-back road games with Owen and Avery to the head of the league list.

Ollis hopes the Wolverines can become road warriors instead of road worriers.

“I’ve tried not to worry about it, because there’s nothing we can do about it,” Ollis said. “I’ve told our players to look at it like we’re in the playoffs and on the road for four consecutive weeks. This will be good experience for that.

Though 3-2 thus far this season, Pisgah will offer the toughest test yet for a Polk County team growing in confidence each week thanks to its 4-0 start. The Bears’ two losses came to defending 1A state champion Murphy and last week’s 46-6 setback at Greeneville, Tenn., the top-ranked 4A team in the state.

“We’re going to get a football team in Pisgah that matches up with us as any as any team we’ve faced,” Ollis said. “This is going to be good for us. We need that challenge. We need to be pushed.

“I think we’re relishing the opportunity to play a quality program with a lot of tradition. We’re looking forward to the challenge.”

The Wolverines will certainly be pushed to maintain its streak of 10 straight scoreless quarters against one of the better offenses in Western North Carolina.

“They’re a multiple formation team, which poses issues for us if we can’t get lined up correctly,” Ollis said. “They’re no-huddle and will throw out a lot of formations and try to get you out of position. The quarterback is very polished, and he’s got a couple of good receivers. This is the first time we’ve seen two quality wide receivers.

“One of the things we have to do defensively is prevent them from hitting a home run. We’ve been able to do that, too, with some big passes and with Elijah (Sutton). They have the same capacity, especially at the wide receiver position.”

Pisgah will celebrate Homecoming on Friday, which should merely add to what is typically one of the largest and loudest home crowds in the area. It will also be the Wolverines’ first game this season on artificial turf.

A lot of factors adding up to what should be an interesting litmus test for Polk County’s program.

“We’re looking at this as a game to help us prepare for conference play and the playoffs down the road,” Ollis said. “We certainly want to win to keep our winning streak alive. I’d like to be talking about being 5-0 at the end of the night.”

Another Rutherford County foe, another win for Polk County’s boys soccer team. After knocking off Chase for its first win... read more