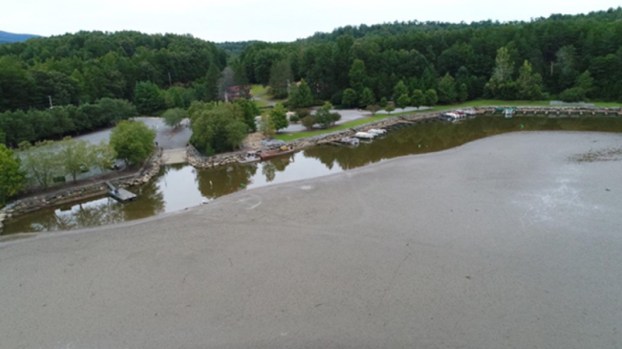 Pictured is Lake Adger a couple of weeks ago when the lake was drawn down 5 feet in preparation for Hurricane Irma. The N.C. Wildlife Resources Commission (WRC) plans to dredge the marina area channel at the beginning of 2018. The project is expected to take approximately two months and cost an estimated $350,000-$400,000. (photos submitted by the WRC)

Lake Adger dredging to start in 2018

MILL SPRING – The N.C. Wildlife Resources Commission (WRC) plans to begin dredging the marina at Polk County’s Lake Adger after the beginning of 2018.

The Polk County Board of Commissioners met Monday, Sept. 18 and heard from WRC engineers Gary Gardner and Jeff Ferguson about the project.

Gardner said Lake Adger was created in 1925 by the construction of the Turner Shoals Dam. Polk County purchased the lake and the dam in 2009.

“Sediment buildup from the Green River has led to access issues with the public marina, jointly operated by the county and the WRC,” Gardner said.

Gardner showed several photographs, both of the sedimentation in the lake and what the dredging operation will look like while there. He reviewed a presentation on the dredging, the challenges and the next steps to finalize the project.

An agreement between the Lake Adger Property Owners Association, Lake Adger Developers, Polk County, Northbrook Carolina Hydro and WRC was signed in 2004 to provide public access to Lake Adger. The agreement includes that WRC pays an annual fee and to also meet the following requirement:

Gardner said how to dredge the lake has been the big question because the WRC wants to try to dredge between 6-10 feet.

“Two Sundays ago we really learned a lot when the lake was pulled down its maximum 5 feet,” Gardner said.

Lake Adger was pulled down 5 feet in preparation for Hurricane Irma and Gardner said wildlife resource officer Toby Jenkins took pictures of the lake with a drone.

Gardner said at the marina the lake still has a fairly defined channel but at the boat ramp everything is creeping in.

Gardner said the state anticipates beginning the dredging at the first of the year. The project is anticipated to take approximately two months, when the ramp and parking lot at the marina will likely be unavailable because of the equipment.

Part of the project will also be the N.C. Department of Transportation coming in after the dredging to fix any concrete or asphalt damage the dredging equipment could cause to the area, which Gardner said should only take a couple of days.

Challenges of the dredging project have been finding a suitable location to deposit spoils.

“This was the longest hold up as we searched for suitable sites on WRC game lands,” Gardner said. “We now have a few options through contacts provided by the county. All have varied issues and will involve an intensive permitting process.”

Other challenges include the state determining the depth possible to dredge before hitting the hard bottom, said Gardner. A recent Geotech survey shows the hard bed is 6 feet deep in several places along the channel, he said.

The state has also researched how to dredge, either by mechanical or hydraulic methods. Since the lake can only be drawn down 5 feet per Northbrook, Gardner said hydraulic dredging is the best option.

The next steps for the state are to confirm volumes of sediment to be removed with an updated bathymetric survey, to collect and analyze sediment samples, to finalize plans for dredging, dewatering and application of spoil, to develop a scope of work for the bid process and to start the permitting process.

Gardner said once the project is closer, the WRC will start putting up signs, will have information on the WRC website and will work with the county and the local media to ensure the public is informed.

Who let the dogs out?

On Sunday, Oct. 8 the Tryon Riding and Hunt Club will be hosting the 84th Any and All Dog Show... read more