COLUMBUS – According to the North Carolina State Board of Education school accountability results, Polk County Schools rank second only to Chapel Hill. Out of 115 school systems in the state, Polk County is the only school system to have all of their schools earning a performance grade of either A or B.

“That means we’re one of the premier school systems in the state for performance,” he said.

The reports, which are based on information from state and federal assessments, also ranked Polk schools very high in the growth section. Scherping said growth measured the school’s performance in meeting the needs of the students. 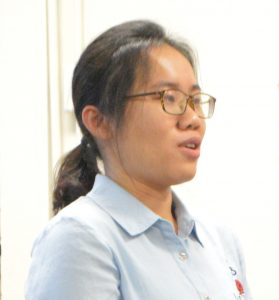 New Chinese language teacher for Polk County Middle School, Hongye Du, expresses her appreciation and excitement about being in Polk County to the Polk County School Board during the September 18 meeting. (Photo by Catherine Hunter)

All the Polk County schools ranked either and A or a B for growth, with Polk Middle School exceeding the expected needs and scoring a 3.45. Scherping explained that a score of 2.0 or greater showed the school exceeding growth needs.

“Polk Middle is one of only a few schools in the state to exceed student growth,” he said.

Board Chairman Geoffrey Tennant attributed the excellent report to the students, the parents, the faculty and staff, and the support of the community.

While the schools overall ranked very high, Mike Melton with student services, said the report for Polk County students with disabilities was not as strong.

According to Melton, with a state target of 80 percent, Polk schools had 77.8 percent of students with disabilities graduating high school with a regular diploma. He also pointed out that the state requirements have been raised and that Polk schools did exceed the state average of 67.30 percent.

Melton said in addition to the state requirements being raised, one of the reasons Polk schools were not scoring as high for students with disabilities was lack of good attendance.  “Because they have significant disabilities, they have more significant absences,” he said.

Polk County Schools Superintendent Aaron Greene said, “Our students generally are outperforming the others in the state.  I wouldn’t get too caught up in those numbers.”

The board also discussed the Polk Enrichment Academy for Kids (PEAK) after school program. Curriculum Director Ronette Dill said they have 140 students enrolled in the program. She added that 38 students are receiving scholarships to attend, and they are looking for sponsors to help 40 more students who need help.

The board approved a first reading of the enrollment policy after Greene recommended striking a sentence limiting dual enrollment to ages six through 13. The board also adopted a transportation policy for school events and voted to have Tennant represent Polk County Schools at the November North Carolina School Board Association Conference in Greensboro.

Who let the dogs out?

On Sunday, Oct. 8 the Tryon Riding and Hunt Club will be hosting the 84th Any and All Dog Show... read more