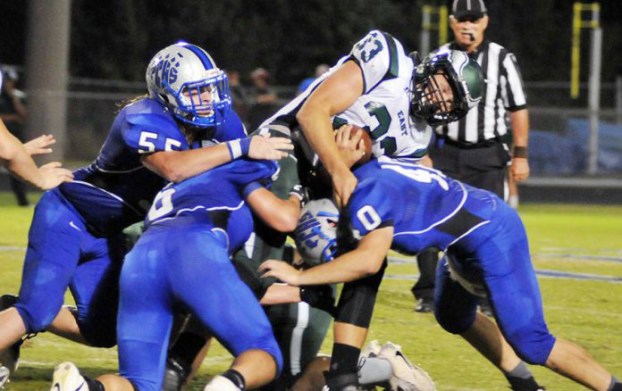 Jamie Thompson has returned this season to spending Friday nights overlooking whatever field on which Polk County is playing.

So far, the view has been good.

After three seasons as Polk County’s head coach, Thompson is settling back into the familiar role of defensive coordinator and spending game nights as part of the Wolverines’ coaching staff stationed atop the press box.

The first four games in that role have been rewarding for Thompson, who has overseen a Wolverine defense keen on tossing out low numbers at an almost-historic pace:

• The Wolverines notched their second straight shutout in Friday’s 42-0 rout of East Henderson. It’s just the fourth time in school history that has been done (the others coming in 1989, 2003 and 2006).

• With seven sacks, sophomore Bryson Seay is already halfway to the school single-season record of 13 set in 2004 by Mason Harris.

The early-season success, Thompson said, is the result of the work and preparation that begins with the coaches’ meeting on Sundays and continues through the week until kickoff.

“Throughout the week we set a plan, and the kids are following it,” Thompson said. “We’ve got veteran kids now and they are responding well.

“Even if we give up a play, they forget it, and that’s one thing I’m preaching to them, that we’ve got a good enough defense no matter what happens as long as we stop them from getting into the end zone.”

Of particular pride to the defensive unit at present is its streak of scoreless quarters. Polk County hasn’t allowed a point since R-S Central scored with 1:04 left in the second quarter of its 30-14 loss, a string of 10 straight quarters without allowing a point.

True, Polk County has had a bit of luck on its side with both Landrum and East Henderson having long runs called back due to penalty, the Eagles scoring a touchdown on theirs, but the Wolverines also haven’t bent even when faced with an opponent taking possession deep in Polk territory.

“There have been times this year when we’ve been in short fields and stopped teams,” Thompson said. “Ten shutout quarters in a row is huge. I talked to them about that (before Friday’s win). I said, hey, we can do this, and they did it.”

Polk County’s defense will face by far its toughest challenge of the season this Friday at Pisgah. Led by junior quarterback Tanner Wike, the 3-2 Bears have averaged more than 27 points per game this season and can move the ball effectively in the air or via the ground. If nothing else, the trip to Canton should help Polk County prepare for the explosive offenses they’ll see from Western Highlands Conference foes Mountain Heritage and Mitchell.

“It’s just great leadership and kids being coachable and having athletes,” Thompson said. “There are times when I might make a call or two but the kids are reading plays well and reacting and getting to the ball and swarming to the ball and making things easy for us. We’ve got a lot of confidence right now.”