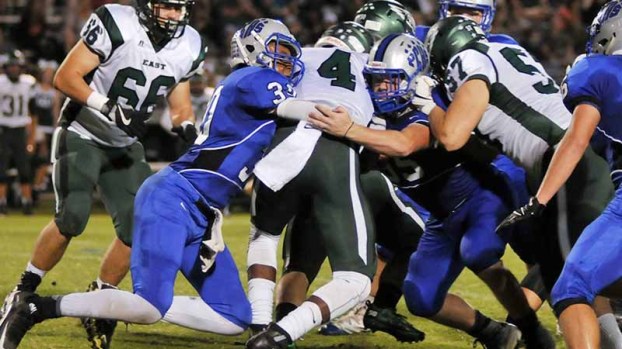 COLUMBUS – A difficult month on the road awaits Polk County’s football team, which made Friday’s Homecoming rout of East Henderson even more worth savoring.

There certainly were plenty of moments to appreciate.

Polk County’s 42-0 thumping of East emphatically moved the Wolverines to 4-0 for the first time since 2010. Elijah Sutton scored two touchdowns and had his fourth straight 100-yard rushing game and the Wolverines completed back-to-back shutouts for only the fourth time in school history.

Big crowd, perfect weather, playing time for everyone and another win – it’s hard to script a much better Homecoming than that.

“A lot of people did a lot of good things tonight,” said Polk County head coach Bruce Ollis. “It’s always good to win Homecoming. (But) our homestand is over and we’re on the road.”

Save for a long touchdown run negated by a penalty, East Henderson never mounted a serious scoring threat. The Eagles managed just 58 total yards in the game, including just eight rushing yards as Polk County smothered the Eagles’ ground attack. Quarterback Chris Hemphill hit 4-of-11 passes for 50 yards to account for the bulk of East’s offense.

Polk County, meanwhile, racked up 353 yards, with Sutton rushing for 112 yards on nine carries. Dillon Overholt added 57 yards on the ground and threw for 103 yards in 6-of-10 attempts.

The Eagles (1-4) kept Polk out of the end zone on its first drive, forcing a fumble at the East 12 after a roughing-the-punter penalty kept the possession alive. But that stop eventually led to a nine-second flurry that began to give the Wolverines the upper hand.

Following the fumble, East failed to gain a first down, and a high snap on the Eagles’ punt attempt sailed out of the end zone, giving Polk County a safety and 2-0 lead with 5:08 left in the first period.

On the ensuing free kick, Sutton fielded the ball at the Polk 38 and accelerated through the heart of East’s coverage, racing to the end zone. The Wolverines missed a 2-point conversion try but still led 8-0 with 4:59 left in the first period.

Polk forced an East Henderson punt on its ensuing drive and went to work again, marching 49 yards in eight plays. Dillon Overholt capped that possession with a 7-yard touchdown scramble, shaking off a big hit at the 1 to power into the end zone. Luis Hernandez’ extra point made it 15-0 lead with 8:48 left in the half.

The Wolverines would just need one play to score on their next offensive series as Overholt ran the option to perfection, rolling off the left corner and taking a step upfield before pitching to Sutton at the last moment. Sutton raced untouched past the Wolverine bench on a 67-yard scoring jaunt to give Polk the 21-0 lead it would hold at the half.

“At halftime, even though we’re up 21-0, we talked about our lack of execution to a certain degree,” Ollis said. “We really didn’t execute that well. We hit some home runs, got a safety, a kickoff return and a long run, but we really didn’t put a drive together.

“That’s the first time we’ve gotten the ball out on the option all year. We talked about that during the week. I really give Dillon a lot of credit. I told him if we could get the ball out to Elijah one time, he’ll take it to the house, and he did.”

Special teams again hurt the Eagles in the third period as a fumbled snap on a punt attempt gave Polk County the ball at the East 25. The Wolverines needed just three plays to score, with Overholt keeping on an option to his right and covering four yards into the end zone to give Polk a 28-0 lead with 7:31 left in the third.

The Wolverines added a pair of touchdowns in the fourth quarter on a Bryson Seay 4-yard run and a 28-yard pass from Avery Edwards to Chase Bishop.

Dillon Knighton had three catches for 38 yards, Bishop had two for 63 and Austin Wilson rushed for 34 yards on four carries. Markell Lipscomb and Seay each had three tackles for loss.

Polk County begins a four-game road trip next week with a trip to Pisgah, the first meeting between the two schools in the program’s history.

“We’re in a good place,” Ollis said. “It will be a challenging week next week.”

LANDRUM – Landrum Police Chief Tim Edgens said the cause of a freak accident at the CVS shortly after noon... read more