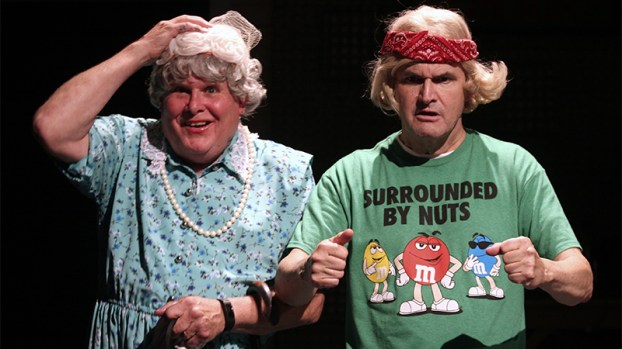 “Greater Tuna” premiered in 1981, a play about Texas’ third smallest town, where the Lion’s Club is too liberal and Patsy Cline never dies—a town full of eccentric characters, largely with small minds. “Tuna” was once the most performed play in America, and even did a command performance at the White House.

Starring in the show are well-known local actors, Chris Bartol and Mark Monaghan—both veterans of the TLT stage. Part of the fun for the audience is never knowing which character an actor will appear as next, just moments after exiting the stage as someone else. They have lightning fast costume changes, including wigs, hats, and whatever. Accents flip from one to another as the two actors constantly switch from the likes of an old-school harpy to a dog-loving teen to a reverend who spouts every cliché known to mankind to raucous Didi to a rebellious young man to the local sheriff, and on and on.

“Greater Tuna” opens Thursday, Sept. 14 (with a reception for opening-night ticket holders starting at 7 p.m.) and runs through Sunday, Sept. 17. The show will run for a second weekend, Sept. 21-24. Evening shows start at 8 p.m., with Sunday matinees at 3 p.m. All performances play at the Tryon Little Theater Workshop, 512 S. Trade St. in Tryon. Tickets can be purchased online at www.tltinfo.org or at the Workshop box office open Monday through Saturday, 10 a.m. – 1 p.m. Check the website, or call 828-859-2466 for more information.

Margaret Prince Lancaster passed away Sunday, September 10 surrounded by her loving family.  She was the daughter of the late... read more