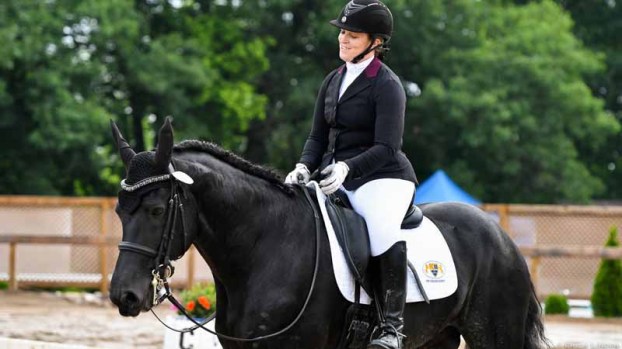 MILL SPRING – Laurietta Oakleaf will be giving up her wheel chair this weekend for a big, beautiful black stallion. Oakleaf, of Coatsville, Pa., is competing in the USEF (United States Equestrian Federation) Para-Equestrian Dressage National Championship at the Tryon International Equestrian Center (TIEC).

Oakleaf started riding jumpers and dressage horses in 1993. She switched to dressage in 2007 when became active in para-riding. “There were not a lot of choices for riders then,” she said. “It was either dressage or driving.”

“Its the GBS and the CIDP that affects me the most,” she said. “It causes muscle weakness and nerve damage. Most of my body is numb.”

According to Oakleaf she has dealt with epilepsy since she was 16. In 2001 the CIDP paralyzed her from the neck down for a month. She improved, but fought paralysis from the hips down for two more years.

“Most doctors have told me that I should not be walking or I would never walk again,” she wrote on her GoFundMe page. “I did surprise them because I believed that I would again and never gave up.”

Oakleaf credits horseback riding with her ability to walk now using leg braces. Though her body is basically numb to touch, she has learned to do things such as feel her horse through her core and her feet. She also uses two dressage whips when riding because she cannot signal her horse effectively with her feet.

Oakleaf is a level two para-dressage rider. She explained that para-riding is divided into five levels, one being the most in need of external support and five the least. The levels measure the number and type of dispensations the riders use, such as the rein holds Oakleaf uses or the brace she has in each boot. She also simply nods her head rather than offering a full salute to the dressage judges and rides with her foot secured in the stirrup.

Just like any other athlete Oakleaf said the para-riders train hard for their sport. She spends four to six days a week doing cardio and strength training during the day and riding in the evenings. She also works as an equine artist creating beautiful charcoal and graphite drawings and taking photographs to sell to help support her riding.

Oakleaf was the reserve champion in the 2016 national competition and hopes to qualify for the World Equestrian Games while competing at TIEC this week.

While she’s overcome a great deal to be here, Oakleaf said the biggest challenge is financial. Without the long list of sponsors who have helped she couldn’t have made it this far. Locally, Whitley Medical Equipment in Hendersonville, donated her wheel chair and the Butterfly Creek Inn in Tryon is donating her lodging for the event.

Butterfly Creek Inn owner Sarah Huff said she didn’t know Oakleaf when she called asking the price of lodging. “At the time I didn’t know her story. I just knew she was doing para-dressage and that was enough,” Huff said.

Anyone wishing to support Oakleaf in her journey to WEG can go to www.uspea.org or GoFundMe.com and search for Laurietta’s ParaOdyssey to Rio.