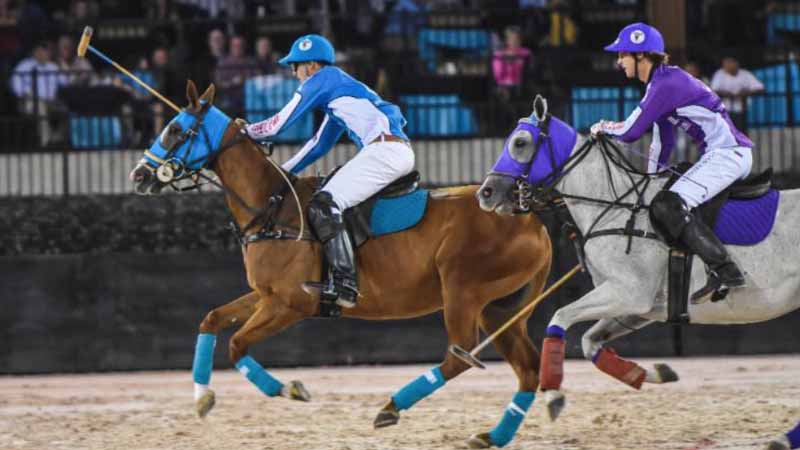 The innovative and action-packed revival to traditional arena polo that is Gladiator Polo has captivated audiences around the world, and found a welcomed home at Tryon International Equestrian Center this summer. The inaugural match was played on Saturday, June 24, which was championed by Team Greenville and saw a record crowd of spectators join the action.

This past weekend’s match on Saturday, Sept. 9 saw some of the top talents in arena polo take to the arena, as the initial kick-off for the Gladiator Polo Fall Series presented by Coca-Cola. Patrick Uretz, one of the most decorated up-and-coming arena polo players, found himself quarterbacking the match and leading Team Asheville to victory.

“I think Gladiator Polo is great. I think it’s so much better for the spectators to see and cheer and I’ve never seen people get this into a polo match before in my life,” said Patrick Uretz, who was awarded the night’s MVP award. “They really got into it. The fans were great, and a lot of fun to have them score a goal and scream your name.”

Uretz was a catalyst for Team Asheville, propelling them to a come-from-behind win. A talented player with a breadth of experience in both the arena and on the field, Uretz was a fixture of the match and commented on the fast and continuous play in the George H. Morris Arena.

“I played arena polo in college and this is similar in the sense that it’s the same game, but it’s so much faster and a lot more open. The way that the referees call it, they let a lot more go because we are more skilled at this level, as professionals and with the horses,” he explained. “They know that we can take those chances. In college, they have to call it a little tighter. It’s a lot more fun to be able to run and play a lot harder.”

Uretz was supported by team members, Costi Caset and Geronimo Obregon, who clicked well as a team trio. Caset commented on the victory by Team Asheville, stating, “Tonight, was amazing. It was really unbelievable and more than I expected. Last time, I only got to play in the tryouts in Florida, which was a lot of fun, but it was nothing like this. Today, with the crowd and the big arena and the amazing footing, it was a great night.”

The third player on Team Asheville, Geronimo Obregon, is a member of the talented Obregon family and took his time to shine under the lights at TIEC in stride in his first appearance as a Gladiator Polo player, all while besting his older brother Facundo Obregon, who played for Team Charlotte.

“It feels good to beat my big brother! The crowd tonight was amazing. We had a lot of fun. The guys were really in it tonight. This is my first time playing in the arena,” he elaborated. “I played a practice in Florida, but I never played before that. It’s very different than regular polo, a very different sport, but it’s fun.”

Urtez concluded, speaking to the quality of play and the durability and footing of the George H. Morris Arena, which was prepared specifically for the match this evening. He commented, “The arena footing is amazing. You can take the horse on turns and banks. The size is so great. The play stays open and it never got slow today. I think that’s what helped us in the end today, hitting big back shots, long shots in front. The other guys did such a good job of picking those balls up and scoring. I think Costi had like seven goals tonight, which is out of control. It was just an amazing night.”

The final match of the season will be played on Saturday, Sept. 30, at 8 p.m. in an epic showdown for the “Battle of the Carolinas” to conclude the Gladiator Polo season.