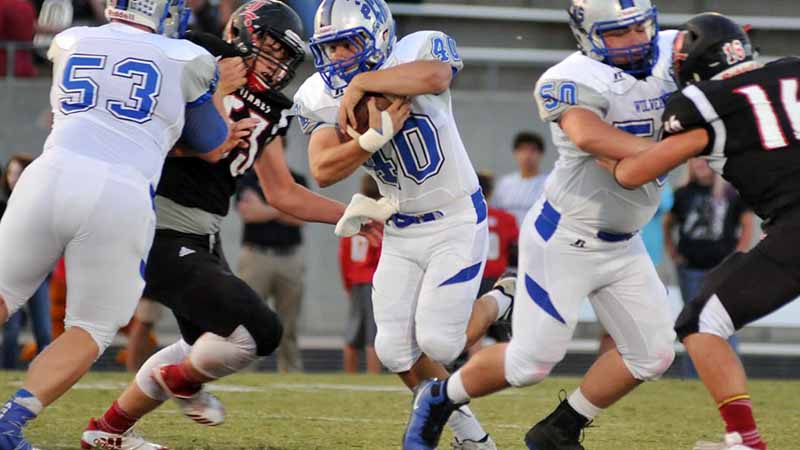 LANDRUM – Polk County head football coach Bruce Ollis observed earlier this week that if the Wolverines kept holding foes to 14 points, as they did in their first two games, there might be plenty of victories to come this season.

Zero points allowed will also earn a win or two as well.

Polk County pitched a shutout Friday night, a dominating defensive effort helping lift the Wolverines to a 24-0 victory at Landrum that both ended the Cardinals’ two-year winning streak in this border rivalry and gave Ollis the 200th victory of his career.

The Wolverines (3-0) dodged an early bullet, a long Landrum run midway through the first quarter negated by a penalty, and gave the Cardinals little hope from there on, allowing just 119 total yards. Landrum (0-3) only had two drives that moved inside the Polk 30, one ending in a turnover, the other ending on downs. 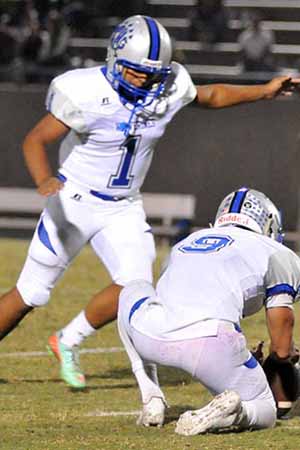 “The thing I’m most proud of is our defensive shutout,” said Ollis, now 200-153 in his career with 113 of those wins at Polk County. “That’s six consecutive scoreless quarters of football. That’s not easy to do.”

Down 14-0 at the half, any hopes that Landrum had of a comeback vanished in a three-play sequence late in the final minute of the third quarter.

Facing a 4th-and-12 at the 25, Ollis called on senior kicker Luis Hernandez, who drilled a 41-yard field goal with 52 seconds left in the quarter. The kick was a yard short of Ben McEntire’s 42-yard school-record field goal in 2000 against Andrews and gave Polk County a 17-0 lead.

The Wolverines then recovered a Landrum fumble on the ensuing kickoff, gaining possession at the Cardinal 36. Ollis’ son, assistant coach Jordan Ollis, suggested running a pass play the team worked on during the week – and Polk worked it to perfection, Dillon Overholt firing a perfect ball to tight end Markell Lipscomb for a 36-yard score.

“Jordan said Dad, here’s the time to call it,” Ollis said of the touchdown pass. “Dillon hit Markell in full stride. That was a laser beam. That was the right call at the time.

“It’s huge for us to be able to attempt 40 and 45-yard field goals. That’s a big deal. Luis hit that one and that gave us a big spark.”

The first, a 34-yard scoring pass from Overholt to Chase Bishop, came on the Wolverines’ initial drive of the game. Lined up at tight end, Bishop slipped behind the Landrum defense, hauled in Overholt’s pass at the 8 and raced into the end zone to cap a six-play, 55-yard drive. Hernandez made it 7-0 with his point after at the 6:55 mark of the first quarter.

Dillon Knighton’s interception stopped the Cardinals on their next drive, and the two teams then traded possessions until Polk took over at its 23 with 4:17 remaining. Facing 3rd-and-1 at the 32, Elijah Sutton took a handoff, bounced outside to his left, reached the end and raced past the Cardinal defense to the end zone. Hernandez made it 14-0 with 3:13 left in the half.

“We named Elijah a game captain, and he responded and played well,” Ollis said. “It was a little bit of a test of our will early. We didn’t play well in the beginning offensively. We just kept grinding.”

The Wolverines had two other scoring threats – Hernandez just wide left on a 39-yard field goal at the end of the first half and a drive ending on downs at the Landrum 10 to open the third period. 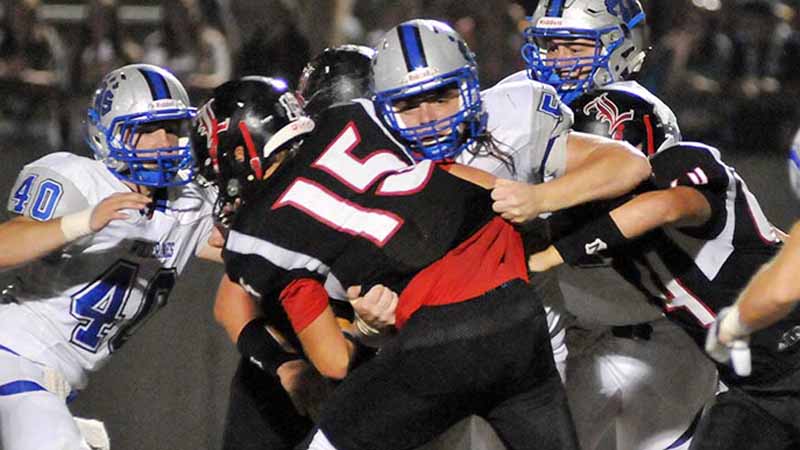 Sutton finished with 107 yards rushing on 11 carries and Overholt added 93 yards on 15 carries. Overholt was also 6-of-11 through the air for 89 yards and two touchdowns.

“I can’t think of a better group to be associated with,” Ollis said. “The players, the coaches, are just great people to be around. I’m just blessed to be involved with them.”