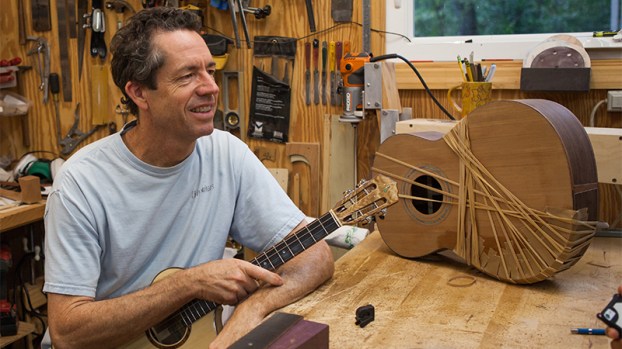 Jay Lichty of Tryon is one of six world renown stringed instrument makers who are making ukuleles for hospitalized children. (Photo submitted by Corrie Woods)

TRYON – When Jay Lichty started making instruments in 2009 he had no idea he would be changing lives. Today he is one of six craftsmen across the country helping provide instruments for sick children.

“They wanted to see if there was a difference in the instruments’ sound or how they would play,” said Woods.

According to Woods the six crafters decided they would each build a ukulele of the same material and compare the instruments. When the luthiers decided the project needed to be associated with a non-profit organization, Woods and other volunteers started researching non-profits.

“We found this amazing organization doing great things in hospitals,” she said. “Imagine a child in for a grueling treatment getting a ukulele to play and take home with them.”

The Ukulele Kids Club (UKC) is a 501(c)3 that provides ukuleles to children for music therapy in more than 100 hospitals nationwide, including Grenville, S.C. Duke hospital and others in North and South Carolina. The UKC has a much bigger demand than they can meet, so Lichty and Woods, along with other volunteers and the five other luthiers agreeing to the project, formed Luthiers for a Cause.

“They won’t actually be building the ukuleles for the children,” she said. Woods explained that the six luthiers would each build one instrument that they will then display at the November festival in Hawaii. After the festival, people will be able to purchase these special instruments and 100 percent  of the proceeds will go to UKC.

“This is really a big deal,” Woods said. “Each one of these people is giving their time and talent to build these. They’re walking away from a $6,000 sale.”

Woods said that it can take a more than a month to custom build a ukulele. “Jay builds about 20 instruments a year. That’s pretty fast. Some take much longer.”

Lichty, who had been a housing contractor in Tryon for about 30 years, originally started building guitars and ukuleles in 2009 when the housing market bottomed out. “When the housing market failed, he and other contractors struggled,” said Woods who explained that her husband was already a musician and decided to build a ukulele just to see if he could. “Then he built another and people started asking him to build them, and it just went from there.”

Woods first became involved by just taking pictures to document the building process. Before she knew it, she was creating a web site and they were selling ukuleles and guitars worldwide. “It started on a dream and just kept going.”

Since 2009 Lichty has built approximately 240 instruments, mostly custom orders of guitars and ukuleles. The instruments are all acoustic with prices ranging from $5,200 to more than $10,000 for guitars and starting around $3,500 for ukuleles.

“The price can depend on the type of wood, tuners and inlays,” Woods said. “These are for very serious musicians or for those who truly enjoy playing a fine instrument enough to have a custom built one.”

Anyone interested in supporting the Ukulele Kids Club cause can purchase one of the special six instruments after the festival on November 17-19. Woods said the instruments would be kept in secret and revealed at the festival. “The best thing for someone wanting to purchase one is to follow online at luthiersforacause.org,” she said.

Anyone interested in purchasing a custom ordered instrument from Lichty can go to his website, lichtyguitars.com, to see different models and options. The website has a price calculator to help prospective customers get an idea of what it might cost.

“They can call Jay after they have an idea of what they might want,” said Woods who added that lead-time for an instrument to be completed was currently six to 12 months. More information about the UKC can be found at theukc.org.

Take your hands off my Liberty!