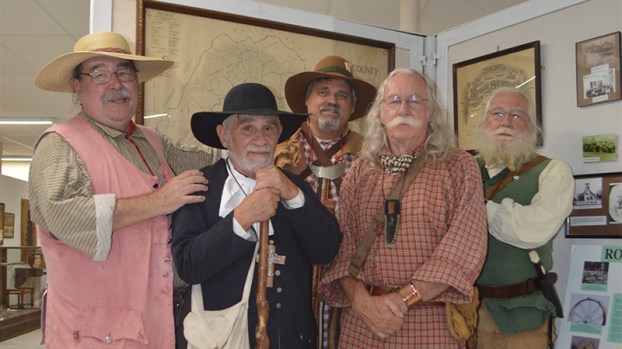 Revolutionary War reenactors Ronnie Lail, Pappy Hawthorne, Ray Absher, David Doan and Tom Vaughan pose for fan photos after their lecture on the Over the Mountain Boys and the Battle of Kings Mountain held at the Polk County History Museum Tuesday, Sept. 5. (Photo by Catherine Hunter)

Take your hands off my Liberty!

‘Over the Mountain Boys’ reenactors prepare for 237th anniversary

COLUMBUS – “Our intent was to stop Ferguson [British commander Major Patrick Ferguson of the American Revolutionary War], but you folks [people living in the foothills] over here were fighting for your lives,” said Revolutionary War reenactor David Doan.

Doan was one of five reenactors from North Carolina and Tennessee who spoke at the Polk County History museum, Tuesday, Sept. 5. The program was one of their monthly events held through the fall season.

The reenactors portrayed the “Over the Mountain Boys” a group of American patriots who, along with men from the foothills, defeated Ferguson at the Battle of Kings Mountain. The Over the Mountain Boys came mostly on horseback from Eastern Tennessee, Western North Carolina and Southwestern Virginia.

In late September and early October 1780, 400 men marched through Gilbert Town (near Rutherfordton), and through what is now Columbus and Tryon to Cowpens, S.C. and the Battle of Kings Mountain. Approximately 300 settlers from the Rutherfordton area joined the Over the Mountain Boys and another 400 South Carolinians to defeat Ferguson in what is known as one of the turning points of the war.

“That day, a group of determined mountain men, fishermen and farmers, defeated one of the strongest armies in the world,” said Ray Absher, president of the Over Mountain Trail Association in Wilkesboro.

Approximately 70 people attended the lecture at the history museum to enjoy hearing “first person” (reenactor takes on a persona and words of an historical figure) tales, see 1780s period style dress and weapons and talk with the reenactors. Reenactor Pappy Hawthorn portrayed a typical 1780s reverend giving a “fire and brimstone” sermon to rally the men.

Dressed in a somber black coat and slouch hat Hawthorne cried out, “The mother country has her hands on your liberty! The enemy is moving to destroy your homes with fire and sword!”

Local historian and writer, Joe Epley of Tryon, said the patriots copied the battle style of the Cherokee, hiding behind rocks and trees. “We didn’t have enough troops to form a line,” Epley said.

The reenactors will be holding a living history encampment Oct. 6 and 7 at Cowpens National Battlefield. Events will include troop and artillery drills, lectures on Saturday, Oct. 7 and a first person impression drama at 6 p.m. on Friday, Oct. 6.

Ranger Will Caldwell with the National Park Service said the reenactors will be recreating a training camp typical of the Continental Army.

The same weekend, Kings Mountain National Military Park will also be holding a living history encampment, featuring troop drills, lectures and kids activities. The Daughters and Sons of the American Revolution will hold a wreath laying ceremony on Saturday at 11 a.m.

On Saturday night, the park will hold a lantern light tour of the battlefield complete with first person impressions by reenactors. There is no charge for the tour, but registration is required two weeks in advance. To register call 864-936-7921.

TRYON – The public is being asked to help identify two persons of interest in relation to a larceny that... read more