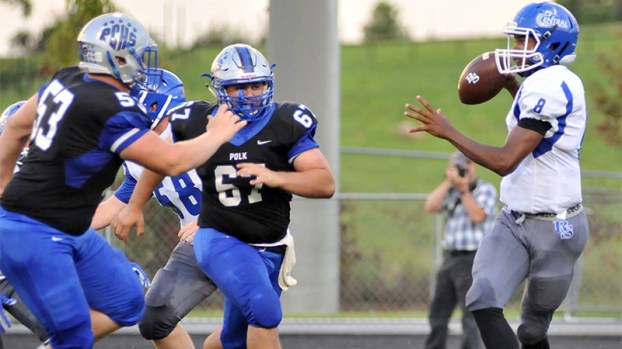 Battle of the Belt Friday in Landrum

Rivals meet in much anticipated matchup

Polk County head football coach Bruce Ollis will make no fiery pregame speech before Friday’s Thermal Belt rivalry game with Landrum, will not urge the Wolverines to defend the honor of county and state in the showdown with its neighbors a mere 15 miles down Interstate 26.

Rather, Ollis and Polk County’s coaching staff have been delivering a message this week of the importance of keeping emotions in check ahead of Friday’s 7:30 p.m. kickoff at Landrum.

“The major thing to do in a rivalry game is maintain your composure, to not get caught up in the excitement,” Ollis said. “We keep our focus on preparation and winning games Mondays through Thursdays. The fun part, the payoff, then comes on Fridays.”

How well Polk County’s offense continues its early-season success may determine whether the Wolverines earn the reward of a Battle of the Belt victory for the first time since 2014. A win would also be the 200th career victory for Ollis.

In victories over Chase and R-S Central, the Wolverines have averaged more than 400 yards of total offense, with 300 of that coming on the ground. The success of a running game averaging 7.4 yards per attempt has opened up passing lanes for Polk senior quarterback Dillon Overholt (12-of-25, 207 yards, three TDs).

“We are still a run-first, throw-second offense,” Ollis said. “Rushing the ball is our primary focus. If we run the ball well, our play-action passes will often hit a home run.

“We’re in a position where we can take what the defense allows us. We’ve rushed for more than (600) yards in our first two games. I’d like to maintain that.”

Polk’s offense will face a Landrum defense that has allowed 76 points in its first two games. But Ollis has been impressed with the Cardinals (0-2) on film and expects a challenge on Friday.

“They get after it. They’re a physical football team,” Ollis said. “We’re going to see option football for the first time, running the inside/outside veer. We’ll have to play assignment football. They’re a lot like us in that guys are playing both ways, so conditioning again will play a huge role.”

The trip to Landrum will also give Polk its first taste of action outside G.M. Tennant Stadium, a much-needed away date with a four-game road trip looming beginning in two weeks.

“This is our first game on the road, so we’ll see how we respond to that,” Ollis said. “The crowd will be huge, hopefully on both sides. I’d like to make a call out to all Wolverine fans to pack the visitor stands on Friday.”

Last Year: Landrum tied the game with six seconds left in regulation and Jesus Alviar hit a 27-yard field goal in overtime for a 17-14 Cardinal win.

Players To Watch: Landrum quarterback Michael Clark has two touchdown runs and has thrown for a score in the Cardinals’ new flexbone offense. . . Jadyn Suddeth and Austin Hutchins will be among the other names to watch in the Cardinal backfield.