Mobile hospital will be stationed at 2018 WEG 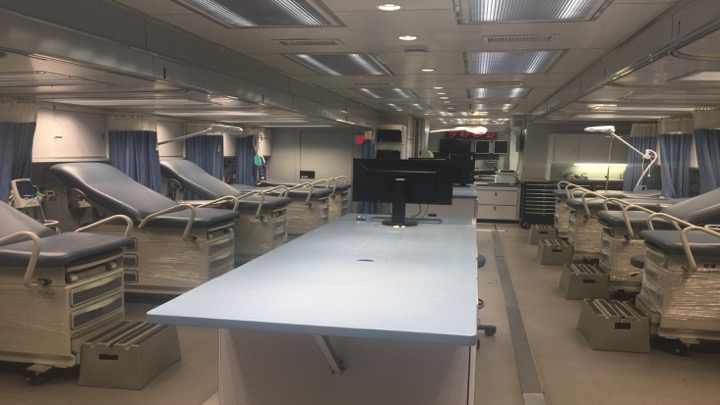 County and TIEC officials visited Charlotte in August to tour the CHS’s MED-1 mobile hospital that will be stationed at the World Equestrian Games next September. (photo submitted by Bobby Arledge)

MILL SPRING – A mobile hospital with surgical capabilities will be stationed at the 2018 World Equestrian Games (WEG) as well as many other emergency stations as part of planning for the event next September at the Tryon International Equestrian Center (TIEC).

Arledge reviewed a PowerPoint about the planning and said Sept. 11, 2018 will be the opening ceremony and the events will start Sept. 12, which should be the heaviest day of spectators because of the events.

Arledge said there are two different planning groups — one for the actual event inside TIEC and another group for outside, or the rest of the county.

The event has been federally designated as a SEAR III event, which means Polk County will receive some federal support, but no federal money.

Arledge said state officials are working to get the event lowered to a SEAR II event, which would mean there would be federal funding and more support in terms in of resources.

Arledge said stakeholder meetings are being held monthly at TIEC, with county manager Marche Pittman saying there were more than 80 people at the last meeting, including local, state and federal agencies.

To cut down on traffic in the county, Arledge said the plan is to use shuttles.

The planning group approved a mission statement that is guiding emergency officials to have a safe event as well as to provide uninterrupted services to Polk County citizens during the two-week event.

“It is the mission of Polk County and its partners to facilitate fire, medical, safety, public health and human services, communications and security resources for the 2018 World Equestrian Games, while continuing to provide uninterrupted services to the citizens of Polk County by developing plans and preparing for contingencies to support a safe and successful event,” says the mission statement.

TIEC is planning for three hotels to be built there by September 2018. The roundabout will also be completed by next September, as well as the moving of Pea Ridge Road and an underpass from the parking area off Pea Ridge Road to TIEC.

Other plans include to enclose and add on to the covered arena in TIEC, to build a 20,000-seat arena, to add two new road entrances into the facility and to construct a designated emergency services entrance into TIEC.

MED-1 out of Charlotte’s Carolina Healthcare System (CHS) has been secured to be at TIEC for the entire event. MED-1 travels as two, 53-foot tractor trailers plus other vehicles, and can be operational within 30 minutes of arrival at the site.

Arledge and commissioner chairman Tommy Melton spoke of visiting Charlotte recently to tour the unit and how impressed they were.

The unit is completely self-sustaining for the first 72 hours using generators or local shore power. There are 72 hours of emergency department supplies that travel with the fleet.

Arledge said MED-1 is required to sit on a concrete pad because it is about 68,000 pounds. Along with MED-1, units will be set up around TIEC as first aid stations, Arledge said, and St. Luke’s has agreed to provide overflow if needed.

There will also be a N.C. Emergency Management Joint Operations Center on site and Arledge said he is also trying to get a trailer out of Greensboro for backup if needed. Greensboro also has a shower unit the county is looking into bringing to the event as well, Arledge said.

The Air National Guard is also coming to set up a communications center.

Arledge said the county will not use any local channels for the event so as not to disrupt the county’s 911 center.

Decker said there will definitely be more traffic in the area during the event so TIEC is taking advantage of three exits to access the equestrian center with most people being bussed in.

Commissioner Myron Yoder asked about state support and funding for the event.

Decker said the state is providing resources and TIEC is not being charged for that.

She said TIEC has already received great support from the state on roadwork. She also noted how hard Arledge and Pittman have worked.

Commissioner Ray Gasperson said it’s interesting to see the inner and outer circles in terms of planning groups because the outer circle is the rest of the county.

“That’s where we’re having to make sure we’re taking care of those who live here all the time,” Gasperson said.

Gasperson said the county does not have any funding in the current budget related to the WEG.

“Those other funds, they have to be there somewhere and they certainly aren’t coming from the county’s budget,” Gasperson said.

Gasperson said there’s an assumption that the county is spending money on the event and TIEC, but other than services TIEC gets like other taxpayers, TIEC is getting no funding from the county.

Decker said the highest priority, as stated in the mission statement, is the safety of the people of Polk County. She said to have over 80 people come from outside agencies with their support was impressive, and they are all doing it “in kind,” with a lot of experience and knowledge.

Pittman said Polk is a small, rural community and it needs all the help it can get. He also said the many state agencies that are willing to help, shows the state’s level of commitment and support for this event.

Other topics included TIEC working with Google Maps to have the new roads in the system. Decker said that should be complete within the next 30 days.

Pittman also said one of the things officials have discussed is working with South Carolina to put up signs, directing WEG traffic one way from the interstate to help cut down on traffic on side roads.

Yoder thanked Decker for all her hard work and asked if TIEC has secured the water backup system. Decker said that is on the list and at this point the approach will be to use potable water and water storage. She said TIEC must have backup water and backup electricity identified and she anticipates they will have an emergency plan in the next three months.

Gasperson suggested commissioners receive updates such as the one Tuesday night every few months.