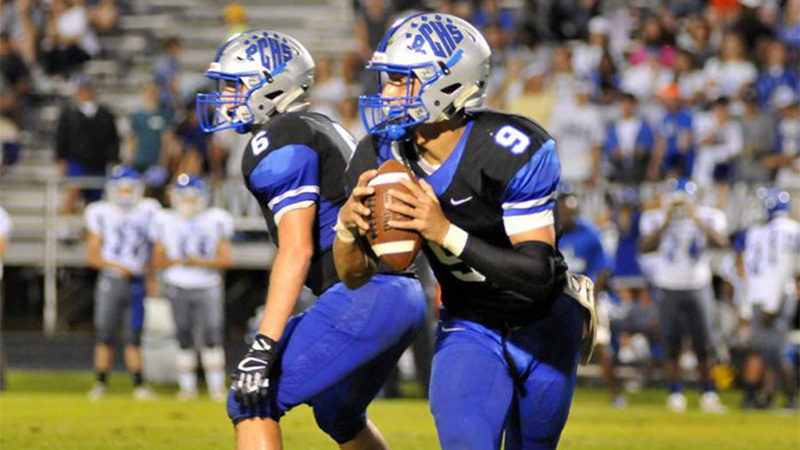 Long touchdown plays grab the football highlights, but the time-consuming, grinding drives are often the real heroes of a winning game plan.

Put the two together, and you get a demoralizing, soul-sucking combination that often drops opponents for good.

Polk County followed a key defensive stand Friday night with one of those possessions, a 15-play, 90-yard epic that gave the Wolverines a two-tocuhdown cushion and all but turned out the lights on R-S Central, leading to a 35-14 victory on what proved to be a perfect night for football at G.M. Tennant Stadium.

The win boosted Polk County to 2-0 for the first time since 2012 and offered another testament to the Wolverines’ conditioning. Polk County outscored R-S Central 22-0 in the second half, one of the other drives an 80-yard march.

“One of the things we talked about at halftime was keeping the ball away from them, because we knew they were very explosive,” said Polk County head coach Bruce Ollis. “I didn’t have any idea it was that many plays and it was that long. That came at a good time.”

That time came during a sequence of possessions in the third period, shortly after Dillon Overholt’s 1-yard run and 2-point pass to Chase Bishop capped that 80-yard drive and gave Polk a 21-14 lead.

The Hilltoppers (1-2) immediately began driving and faced a 1st-and-15 at the Polk 22 after a procedure penalty. There, quarterback Jayden Waddell dropped back to pass, rolling to his right. Under pressure from Hayden Shumate, he rolled back to his left – and was immediately chased down by Polk’s Bryson Seay. The play resulted in 20-yard loss and a brief injury to Waddell, and the Hilltoppers’ drive eventually stalled at the Polk 10.

The Wolverines took over there with 5:44 left and began methodically marching upfield. Facing 4th-and-5 at its 39, Polk County ran its trademark fourth-down spread look, nicknamed Palooza. Overholt rushed for six yards, and the Wolverines continued to march.

Into the fourth period the drive went, with the Wolverines soon facing third-and-13 at the Hilltopper 41. Overholt dropped back to pass, picked up a key block from Elijah Sutton and launched a perfect pass to tight end Markell Lipscomb, the ball just clearing two R-S defenders and settling into Lipscomb’s arms. He walked into the end zone, and Luis Hernandez’ extra point made it 28-14 with 9:30 left in the game.

The drive – 15 plays, 90 yards, 8:14. Polk County had five third downs on the drive and converted four of them, the lone exception leading to the Paloooza play.

“The pass that Dillon completed for the touchdown to Markell, I told him that was the best ball he’d ever thrown,” Ollis said. “That was a backbreaker for them.”

“I knew my time was going to come,” said Lipscomb, who scored the first two touchdowns of his career in the game. “It came to me, went into my hands, touchdown. I had to put the team up. I did it for my team.”

Wyatt Derkach intercepted a Waddell pass on the Hilltoppers’ ensuing possesion and ran it back to the 6. Dillon Knighton carried the ball into the end zone on the next play, and the Wolverines were on their way to victory.

R-S Central finished with 260 total yards, most of those in the first half, which ended with the Hilltoppers holding a 14-13 lead.

“We pitched a shutout in the second half,” Ollis said. “Jamie had them on the board in the weight room at halftime. He wasn’t real happy. He got them ready, and we came back out and played a lot more physically, our coverage was better. Our ends were getting stuck inside and they were breaking contain on us, and if you notice in the second half, that didn’t happen.”

R-S Central responded with perhaps its best drive of the night, a lightning-quick 65-yard drive capped by Waddell’s 10-yard touchdown pass to Brandon Smith to cut Polk’s lead to 13-7. Following a Wolverine punt, the Hilltoppers quickly scored again, needing just over a minute to cover 78 yards, that drive ending with Waddell’s 24-yard scoring strike to Clinton Deyton. The extra point gave R-S a 14-13 lead with 1:04 left in the half.

Polk County opened the second half with a six-play, 80-yard drive to take the lead. Sutton ripped off a 26-yard gain and Overholt followed with a 49-yard scamper to move the Wolverines to the 5. Two plays later, Overholt powered over the left side and into the end zone. He then hit Bishop with a perfect pass in the left corner of the end zone for the 21-14 lead.

Sutton rushed for 123 yards on 12 carries and Overholt added 112 yards on 12 carries with two touchdowns. The senior finished 8-of-13 for 110 yards and two scores through the air. Bishop had three catches for 41 yards to lead the Wolverine receivers.