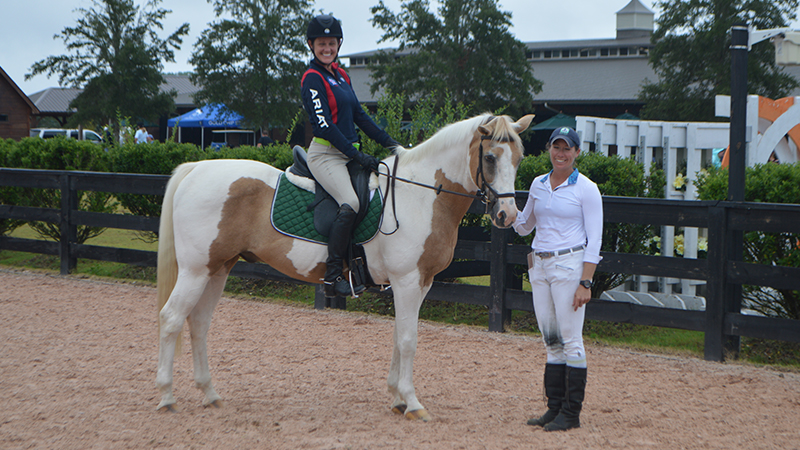 Terri Miller (mounted) and Kathy Rivera (right) are two of the six competitors who escaped Hurricane Harvey in Houston to compete in the American Eventing Championships. (Photos by Catherine Hunter)

MILL SPRING – “I wasn’t there to tell him it was OK,” said American Eventing Championship (AEC) competitor Terri Miller of Houston, Texas, who was worried about her horse. Of the six or so competitors from the Houston area, Miller was the last AEC rider to make it out of Houston before Hurricane Harvey hit the city.

Her horse (coincidently named Miller when she bought him) arrived at the Tryon International Equestrian Center (TIEC) days before she could get here to look after him. Now her horse doesn’t have a barn to go home to after the event.

“We planned to get here [Tryon] on Tuesday [August 29], said Miller. “My team called on Thursday [August 24] and said to get my horse out as soon as possible.”

Miller said she drove the horse to a barn in Austin about 2 ½ hours west of her home in Houston. Then she went back home to take care of her 16-year-old son, Tegan, and their dogs, and to pack up for the trip to North Carolina.

“The goal was to get him [her horse] out and I’d follow,” Miller said. “But I couldn’t leave. I was going to fly out on Saturday, but the airports were closed.”

Now, more concerned for their lives than just making it to the AEC event, Miller desperately loaded her son and dogs in the car on Monday morning and started to drive out of Houston. “I thought I’d figure out where to stay once we got here [Tryon],” she said with a shrug.

Miller described trying one highway after another to find a way out of the city.  “They closed the freeway and made the traffic turn around. It was very surreal driving on the shoulder against the traffic,” she said.

After trying to find a way out of the city for three hours, she and her son finally gave up and turned back home. “Lot’s of tears,” she said.

While dealing with the threat of the hurricane and rising floodwaters, Miller also worried about her horse whose welfare was in the hands of strangers. Tears filled her bright blue eyes and she choked up as she said, “All I could do was sit and watch the rain.”

Then, finally, on Tuesday morning at 8 a.m., Miller received a notice the authorities had opened an evacuation route out of Houston. “We [herself, son and dogs] were in the car in 10 minutes,” she said.

But driving out of the city was just as stressful. “I can’t describe the impact I felt seeing the lines and lines of people coming in pulling boats or loaded with pallets of water,” she said.

Miller found volunteers in the area to look after her son and her dogs and was able to book a flight to Charlotte while standing in the security line at the Austin airport. “I still have to find my son and dogs on my way back home,” she said.

During the four days while Miller worried about her horse, more than 25 other riders, locals, TIEC and AEC officials and TIEC volunteers offered to help look after her horse.

“People offered to clean his stall and walk him every day,” said Miller.  “One trainer from near Charlotte offered to come pick him up and take him to her pasture so he could be out for a while.”

Though she had been worried and scared and endured much stress over the challenges she faced getting to Tryon, Miller couldn’t say enough about how well she has been treated. AEC Competition Secretary Christina Gray adjusted the scheduling so Miller could ride late on the list.

“I’ve been hugged by strangers. People high fived me for getting here,” she said explaining that, though this is the biggest show in her life, the people have made her feel right at home. “Both the eventing community and Tryon have been amazing.”

Miller isn’t sure when she will be able to go back to her home in Houston. She has decided, since her Houston barn was flooded, she will take her horse back to the barn in Austin. The last she heard, her house was all right.

“I think just getting here was so stressful I’m spent,” she said. “Everything after that is a gift. I’m excited to get into the dressage ring and the starting box.”