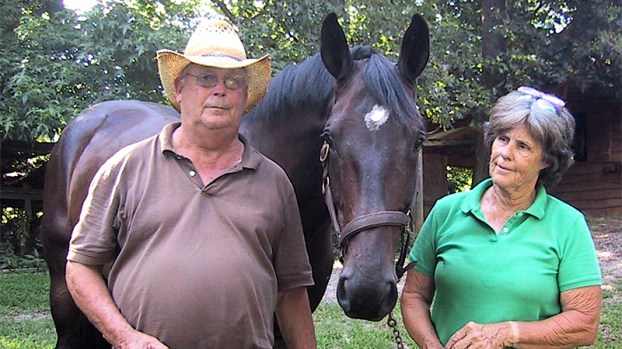 Gerald and Betsy Pack with one of the young horses trained at their Stony Knoll Farm. (Photo/ Judy Heinrich)

There can’t be anybody alive who knows more about Tryon Horse Country history – or lived through more of it – than Gerald Pack. He is such a repository of historic information that whenever I need to check some ancient tidbit, I have to remind myself that Gerald wasn’t actually at the station to help Carter Brown off that train from Michigan in 1917.

But he is a fifth-generation Polk County native (both sides) who became the trainer for his parents’ pony sales business when he was just a boy. He grew up knowing and riding with all the Tryon legends: J. Arthur Reynolds, Gordon Wright, Jarrett Schmid, George Webster, the Mahlers of Chinquapin Farm, and the Kuhns, who hosted the Olympic try-outs at their Cotton Patch Farm, to name only some.

Another Polk County native tells me that many a girl had a crush on Gerald, who was “very good looking and rode like poetry in motion.” Gerald was a local riding phenom who went on to compete and win at major shows and ride for British trainer Lockie Richards and rider/judge Hans Senn of Austria and the Spanish Riding School.

Sadly for the local girls, Gerald fell for a visiting foxhunter from Virginia, and he and Betsy went on to produce two sons, many horses, countless winning students, and a variety of activities for area equestrians to enjoy.

Perhaps the most important and lasting thing they did, which isn’t as widely recognized as it should be, is start something that effectively saved the local horse industry when it was in danger of fading away. It was in the 1970s, some 50 years after Carter Brown and his winter colony of equestrians first established us as “Horse Country,” and nearly that many years again before Tryon International Equestrian Center (TIEC) would arrive to put us on the global map. In hindsight, the ’70s was a pivotal make-or-break period in the trajectory of equestrian sport in our area.

“Betsy and I got married in 1970, and by that time a lot of the older guard had started passing away. There weren’t too many horse activities left,” Gerald remembers. “Tryon Riding & Hunt Club still did the Block House races, held its big annual Charity Show, and did the Any & All Dog Show. There was a series called The Mountain Shows in Black Mountain, Enka and Waynesville. Beyond that we had to go to Camden and Aiken to show. It seemed to us that the horse business in Tryon was about to die.

“We had been doing little shows at my old barn, but from a financial standpoint it got to where we couldn’t do those anymore. Nobody else was doing anything. So we decided to try and start some local schooling shows, and I went to talk to the heads of the Harmon Field Board: Mr. Lankford, Seth Vining and Ray Foster.

“I told them that we wanted to hold on to Harmon Field, that the horses had to stay, and that we could do shows there that were affordable and family-oriented – lots of kids, families picnicking, playing in the river, visiting uptown Tryon, etc.

“I said I would put together a group that would do all the refurbishing of Harmon Field’s Carter P. Brown Equestrian Center and it would be at no cost to the town. The Harmon Field board agreed, so we started with all volunteers and we did a lot of work. The Hyders did all the excavation and people donated all the jumps.

“I named our group ‘Blue Ridge Hunter Jumper Association’ and we started with somewhere around 10 to 20 members. On a real good day we would have 40-60 horses at one of the Harmon Field shows,” Gerald recalls.

One of the first things Gerald did was get the BRHJA shows sanctioned and join the American Horse Show Association (now US Equestrian Federation). By joining AHSA, the BRHJA was allowed to use the organization’s rules and rulebook.

There’s no doubt Gerald and Betsy were taking a gamble that the BRHJA could stop the decline of the area’s horse business, but it turned out to be the success they were hoping for. Today BRHJA has 400 members and attracts 150-175 horses to its Harmon Field shows and more than 300 horses to its shows at FENCE. Gerald and Betsy’s son Lewis is now president of BRHJA and produces its shows through his own Harmon Classics show management company. There were 25 BRHJA-sanctioned shows on its 2017 calendar, in Tryon, Camden, Aiken and New Market, Tennessee.

When BRHJA started, they used judges who were licensed “or at least professional.” Today their judges are either “r” or “R” rated. “Our focus has always been on having decent courses for our horses and making it a teaching process for both horses and riders,” Gerald says. “Now our horses and riders have been going to Wellington, Atlanta, New York, Pennsylvania, Long Island – they’ve been going and winning against the top competition in the country because of the precedent we set here. Today we’ve got the ‘cream of the crop’ coming to TIEC, and our BRHJA horses have been very successful there.”

If Gerald sounds proud, he should be. If it hadn’t been for him and Betsy believing they could “reboot” horse shows at Harmon Field through their fledgling BRHJA more than 40 years ago – and keep them flourishing – Tryon’s equestrian culture could have easily dwindled away.

Think of the assorted equestrian things that have been created here since the 1970s: FENCE, the Green Creek Hounds, three dedicated trail systems, the Western Carolina Hunter Pace Series, Foothills Riding Club, the Carolina Carriage Club, and various schooling events for dressage, hunter/jumpers, and cross country. Between those and shows, there is rarely a weekend that doesn’t have numerous local horse activities going on – and that was true even before TIEC opened in 2014.

Those things might never have come to be if “the horse business in Tryon” had been allowed to die, as Gerald and Betsy feared it would. The draw for horse people could have faded and the equestrian contingent moved on to other areas, as has happened in many parts of the country. The fact that it didn’t happen here is due in large part to the leap of faith taken by the Packs and their band of determined BRHJA volunteers.

So when you see a BRHJA event on the local equestrian calendar, you should drop by to watch – not just because they’re fun and showcase levels of riding from “tadpoles” to Hunter Derbies – but because without them, the many things you enjoy here today might never have existed at all. From Harmon Field to TIEC and even the World Equestrian Games, it was BRHJA that cleared the trail. •

Judy Heinrich is a freelance writer serving national clients in diverse industries. Judy writes for the Tryon Daily Bulletin and Life in Our Foothills on all things horse related. She can be reached at jheinr@windstream.net.

Like most people with water troughs, I dump and clean mine regularly and, between cleanings, remove the inevitable hay bits,... read more