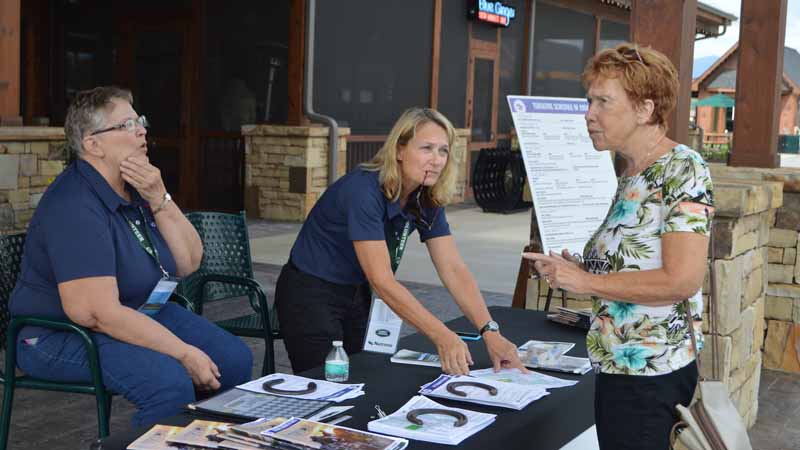 Beverly Bradford (left) and Barbara Bennett (center), both of Rutherfordton, assist Marcheta Cobb (right) who came all the way from Seattle, Wa. to see her granddaughter, Linsey Howard of Kentucky, ride in the American Eventing Championships. (Photo by Catherine Hunter)

TRYON – How many people does it take to put on a national equestrian event? According to Beverly Bradford of Rutherfordton who volunteers at Tryon International Equestrian Center (TIEC) events, “It takes a bunch.”

TIEC Director of Community Engagement Kathryn McMahon of Columbus said they couldn’t do it without the volunteers that help with every aspect of the center. “They work 12 hour days sometimes three or four days in a row,” McMahon said. 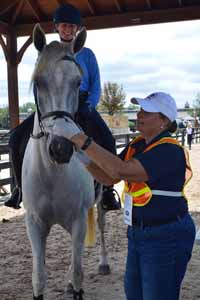 As the lead volunteer of the “bit babes” (bit checkers) Barbara Crawford (right) checks Fernhill Stateside’s bit, noseband, and other tack to be sure the equipment meets all the Fédération Equestre Internationale (FEI) regulations. Fernhill, known as “George” is an Irish sport horse from Newnan, Ga. Rider is Nicole Andrews. (Photo by Catherine Hunter)

TIEC currently has 1,000 “volunteer positions” (different jobs and shifts to be handled) filled by 300 volunteers to make the current 2017 American Eventing Championships, which run through Sept. 3, run smoothly. From everything such as parking trailers to checking horses’ bits and tack, the 300 volunteers fill in the necessary hours, usually starting days before an event to get set up.

Volunteer headquarters leader, Linda Holden, said the volunteers meet as early as 5:30 to pick up their shirts, badges and assignments. “Things are running very smoothly this year,” said Holden. “We have this nice big tent to work out of.”

Though the hours are long, often in the sun or more rigorous weather, the volunteers seem to love the work.

“Many do it because they have a passion for horses,” McMahon said. “Volunteering is also a great way to be a part of an “exciting action event in which they get to see international level riders and horses.” She added that, for some, it can be a good opportunity to add to their resume.

According to McMahon, most of TIEC’s volunteers are from local areas such as Tryon, Landrum, Rutherfordton and Columbus. They do have people from Traveler’s Rest, Hendersonville and other areas. She added that many of the competitors also volunteer to help.

McMahon is already organizing volunteers for the FEI World Equestrian Games to be held at TIEC in September of 2018. She said they already have 2,500 and will need a total of 3,500. “We have [volunteer] positions for everybody 18 years and over,” she said. “They don’t have to have any horse knowledge or experience. We have something for everyone.”

The volunteers are organized into groups who usually support a team leader. The American Eventing Championships called for 11 team leaders to cover everything from the stables to greeters and shuttle drivers.

TIEC hosted the American Eventing Championships last year with 365 volunteers. With approximately 770 horses this year they have 10 percent more competitors than last year. Along with the horses and their riders, come the stable crew and trainers, plus family members and friends. Michelle McConnell Yelton, director of PR and marketing for TIEC, estimates a total of 5,000-6,000 people, including riders, trainers, spectators, judges, officials, etc., will attend this weeklong event.

“Usually if an event is in the same place two years in a row, attendance is down,” said McMahon who credited much of the event’s success to the efforts of the volunteers. 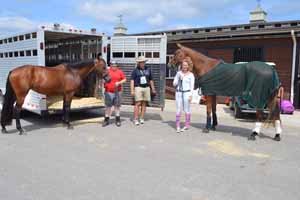 TIEC volunteer stabling lead, Terry Lynch (center), of Columbus helps Liv Levine (right) of Charlotte and Sky Rowen (left) of Knoxville, Tenn. get their horses, Five and Princess Leia, unloaded and settled in the TIEC barns. Part of Lynch’s job as a volunteer is to coordinate parking for 400 to 500 trailers and oversee stabling for approximately 770 horses. (Photo by Catherine Hunter)

Eventing is an equestrian sport originally developed to test cavalry horses and riders. It has been adopted by hunter/jumper riders and includes a dressage test, a cross-country competition and a stadium jumping course.