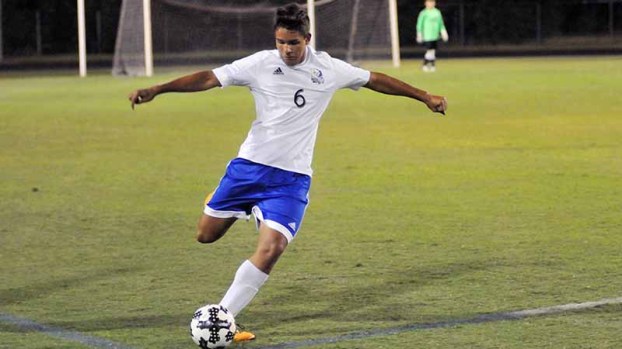 Be it due to the excitement of the first day of school, the first home game or the impact of an 11-day layoff between games, Polk County’s boys soccer team didn’t play as expected Monday for head coach Jose Trejo.

And East Henderson took advantage of that.

The Eagles earned a 4-1 victory over the Wolverines in a non-conference battle in G.M. Tennant Stadium. Polk County (0-2) flashed its potential on both ends of the field at times, but East Henderson (1-2) controlled play for most of the night and might well have won by a larger margin save for the work of its defense, especially senior goalkeeper Wilson Edwards.

Edwards finished with 11 saves, several of them of the point-blank variety, including a brilliant stop just before the end of the first half of a shot from perhaps 10 feet away.

“Wilson did a great job,” Trejo said. “He kept us in there for a while, for sure.

“We weren’t the team I expected to see here tonight. We lacked discipline, and I can definitely see inexperience in certain places. We’ve got to go in (Tuesday) and discuss some things. Overall, we get what we get, and we’ll learn from what happened.”

Polk County pressured East Henderson early and struck first because of it. Isaac Edwards narrowly missed scoring some 10 minutes in, making a nice move on the left wing to beat a defender before being stopped by East goalkeeper Najib Robinson.

Robinson, though, couldn’t stop the effort of Salvador Chavez just 30 seconds later as Chavez drove into the right side of the penalty area and chipped a shot over Robinson and into the net, giving the Wolverines a 1-0 lead.

That advantage lasted all of 20 seconds as East Henderson’s Brandon Padilla unleashed a low line drive into the left corner of the net to even the match at 1-1.

The Polk defense helped keep the match tied until 5:47 remained in the half, when Ronaldo Alvarenga got free in the penalty area and looped a shot over Edwards to give the Eagles a 2-1 advantage they kept at the half.

East Henderson made it 3-1 five minutes into the second half on a Aldo Duvan Montano goal. Chavez appeared to score again just a minute later, but was whistled for being offside, a call that all wearing blue and white disputed. That would be the Wolverines’ best opportunity the rest of the night, and Montano tallied again for the final margin.

“We didn’t quit, defintely,” Trejo said. “I’m glad a game like this happened. It shows us that the season is going to be rough. Once we got mad, we got in there and started to play.”

Polk County is back in action on Wednesday, traveling to Hendersonville for a non-conference 7 p.m. match.