Relive the Revolutionary War at the Polk County History Museum 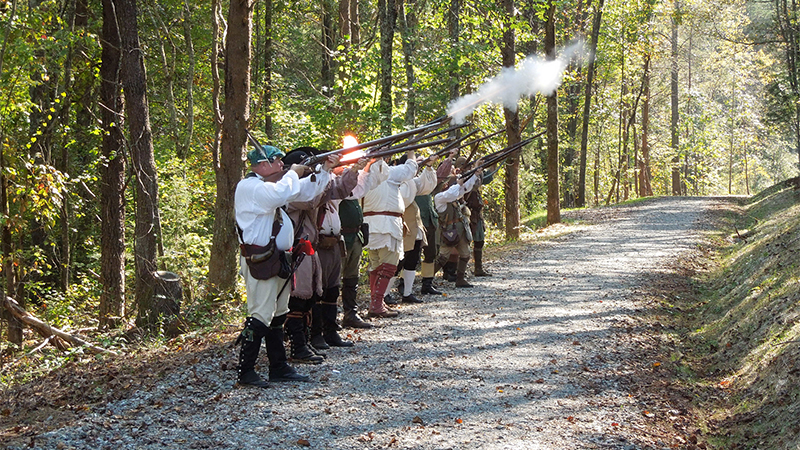 Historical reenactors will come over the mountains from east Tennessee on Tuesday, Sept. 5 to tell the dramatic story of Polk County’s role in the Kings Mountain campaign. Wearing 18th century clothing, they will present the monthly program in the Polk County History Museum in Columbus at 2:30 p.m. Tuesday.

Keeping the story alive is a major goal of Overmountain Victory Trail Association (OVTA). This team of reenactors will be led by Ronnie Lail who for the past four years has been the Grand Marshal for the annual commemorative march that traced the 325-mile trek from Virginia and east Tennessee to defeat a strong Loyalist army that had invaded our region. The mission of the OVTA is to preserve, protect and interpret the route to the Battle of Kings Mountain, including that portion of the trail that runs through Polk County.

Relating the riveting true account with Lail is Tom Vaughan, the march’s Vice Marshal and treasurer of the OVTA. Although retired, both Lail and Vaughan are active story tellers throughout the year. Two other veteran storytellers on the program will be David Sloan, a sheep farmer and vice president of the OVTA, and John “Pappy” Hawthorn who portrays Reverend Samuel Doak, the fiery Presbyterian minister whose prayer at the start of the march in September 1780 called for the Patriots to use the Sword of Gideon to smite the British supporters in battle.

Volunteer militia made the rugged 14-day march with some coming from Abingdon, Va., some from Fort Watauga in what is now east Tennessee, and from east of the mountains, they were joined by Liberty Men from Rutherford (which then included Polk), Burke, Wilkes and Surry counties. On October 5, they reached the Green River in present day Polk County for their last overnight camp at Alexander’s Ford before going into battle at Kings Mountain two days later. It was here that they learned the enemy was headed east, not south.

The overwhelming victory achieved at Kings Mountain by backwoods Patriots was the turning point of the American Revolutionary War.

With more than a fourth of the Loyalist left dead or wounded on the battlefield, the patriots marched more than 600 prisoners to a plantation north of Rutherfordton where nine Tory leaders were hanged. The first to be executed on October 14, 1780 was Colonel Ambrose Mills, whose home on Green River was just upstream from Alexander’s Ford.

As they had for 41 years, OTVA reenactors will again be at Alexander’s Ford on Green River on October 4 during the anniversary of the original march. They will walk Polk County students from Gray’s Chapel down a trail to Alexander’s Ford where they will demonstrate to the youngsters what life was like in 1780 and how the backcountry patriots prepared for the Kings Mountain battle. The annual march follows the route of the original trek which runs through Polk County.

Ted Owens, president of the Polk County Historical Association, said, “Because the schedule during the actual march is so hectic, our historical association invited some of the reenactors to visit the museum a month early and share with our greater community the important story about what happened here.”

The Overmountain Men’s program is open to the public and free. Wearing period dress and carrying muzzle loaders typical of that era, the modern day overmountain men will begin their talk at 2:30 p.m. on September 5 in the Polk County History Museum located at 60 Walker Street in Columbus.