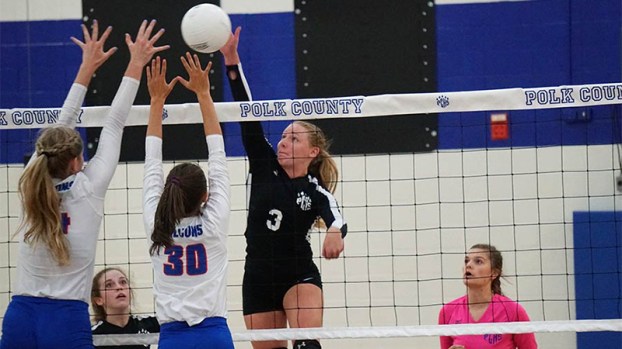 Lynch back in form, feeling blessed after recovery from knee injury

Breathe, Ansley Lynch told herself as she sprawled on Polk County’s volleyball court, a point raging above her.

Get up when you’re ready. Take it easy. Make sure everything is OK.

It’s an attitude the Polk County junior is slowly learning to adopt, seven months removed from tearing her medial patellofemoral ligament during a basketball game at Hendersonville. The ligament holds the kneecap in place.

Lynch has returned from that injury to regain her place in Polk County’s starting lineup. She had six kills and 11 digs in Wednesday’s loss to West Henderson before helping lead Polk to its second win of the season Thursday, a straight-set defeat of Kings Mountain.

Just four matches into the year, Lynch has already begun to display the form that helped her earn all-Western Highlands Conference honors as a sophomore, when she led Polk County in blocks and finished fourth on the team in kills. 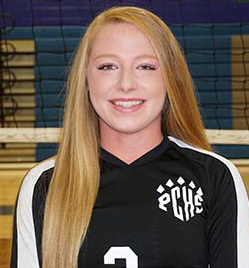 “To me, it looks like she never took six months off,” said Polk County volleyball coach Molly Hill. “She looks great. She’s jumping out of the gym and moving around well. I’ve let her play in the back row this year and she’s doing great.

“You can tell she’s worked hard and really wants it. It’s great to see that.”

The hard work of physical therapy has been married with a newfound reminder to occasionally throttle back, not an easy thing for the athletic Lynch to do. When she fell to halfcourt in Wednesday’s match following a block, she remained there for several seconds after the point ended, just making certain all was well.

“I’m definitely not popping up like I used to,” Lynch said. “I feel like that’s what I had to learn, to take a step back when something hurts. It’s hard for me to to stop and say, Ansley, you need to calm down, you need to take it easy.

“I’m still going to physical therapy. They say it takes a year to recover from this, and I still get sore. It’s just something I have to live with and ice it every night like a baby.”

Having battled knee issues since middle school, Lynch thought her injury at Hendersonville was more of the same. During the second quarter of the game, Lynch drove into the lane, turning to shield the ball from a defender while backing into her. The collision knocked her to the floor and she felt something pop.

After a few moments on the sideline, Lynch asked to return to the game – and immediately collapsed in front of the Polk County bench. The diagnosis of a tear and surgery soon followed, forcing Lynch to miss the remainder of the basketball season as well as the Wolverines’ softball schedule.

“I thought it would be a quick process. I was out of school for two and a half weeks, and I didn’t know I would be on hardcore drugs. It was definitely hard seeing people do something I’ve been doing since I could walk.”

With her history of knee issues, Lynch had already worked with staff at Southeastern Sports Medicine in Hendersonville. Post-surgery she quickly shifted into rehab mode, working toward a goal of being ready for volleyball season.

“They’ve been so supportive and loving,” Lynch said. “They pushed me in the best way. They said, you’ve got to play in the first game, you’ve got to be ready.”

Ready, she was, back for the start of practice in August and in the lineup when Polk County opened its regular season at Enka. The rehab process has not only proven good for Lynch’s physical being, but her outlook on life as well.

“Stepping onto the court was huge,” Lynch said. “That first game gave me chills to get back out there. I’ve never been sidelined before, so I felt so blessed and thankful to be out there.

Cardinals drop opener to Blue Ridge, but improve through game

Landrum did plenty of things right in the Cardinals’ football opener at Blue Ridge (in Greer) on Friday, Aug. 25,... read more