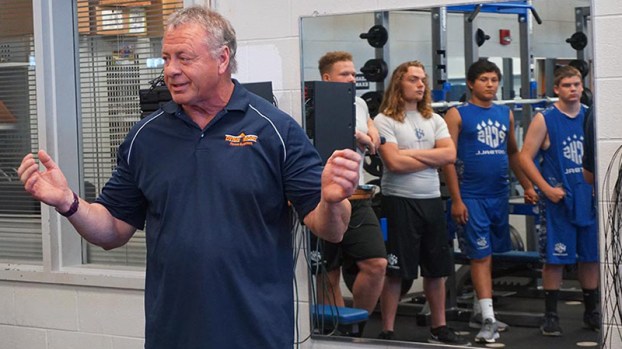 A member of Polk County’s athletic past is hoping to make a big impact on its future.

Polk Central graduate Keith Harris now owns Dynabody, a supplier of health and fitness equipment based in Maryville, Tenn. On Tuesday afternoon, Harris and members of his staff pulled up to Polk County High’s fieldhouse in a delivery truck full of new weight equipment.

Throughout the afternoon, Harris and his team worked with Polk County coaches and athletes to unload and install the new equipment. With setup complete, Harris briefly spoke to Polk County’s football team. 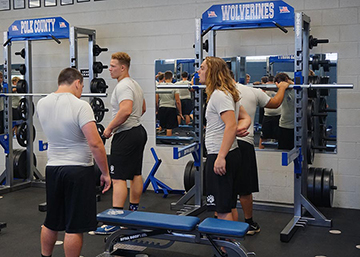 “I am at retirement age, and I wanted to do this while I still had the chance,” said Harris, who talked about his lifelong journey working with weights beginning at Polk Central under former head football coach Jim Taylor.

The deal that Harris worked out with athletic department officials will allow the school to pay for the new equipment over the next three years, said head football coach Bruce Ollis. Community members raised the funds to get the project off the ground.

“This is not just a football weight facility, it’s a Polk County High School facility,” Ollis said. “All athletes in all sports and those in PE classes, it’s going to benefit all of them.

“We’ve gone from six racks to eight. It’s more functional, so we’re going to be able to work out more people in the same amount of time. Everbody in the athletic program is going to benefit from this.”

Along with the eight new racks, the school received new bars, benches, weights, bands and kettlebells. Customized in Polk County blue, the equipment replaces weights that Ollis purchased in 2003.

Polk County’s football program briefly worked with the new equipment before the start of practice.

“Keith wanted to help us and give us an opportunity to not pay everything all at once,” Ollis said. “I have to thank him for all he’s done for us.

“It came at a perfect time for us with the open week (in football). Normally you don’t do a full transition during the season, but the timing was perfect, and DynaBody made it happen. It’s going to be awfully good for our athletic program.”

On Wednesday, Aug. 23 from 6-8 p.m. the Polk County Football program is sponsoring a “Meet the Coaches” event at... read more