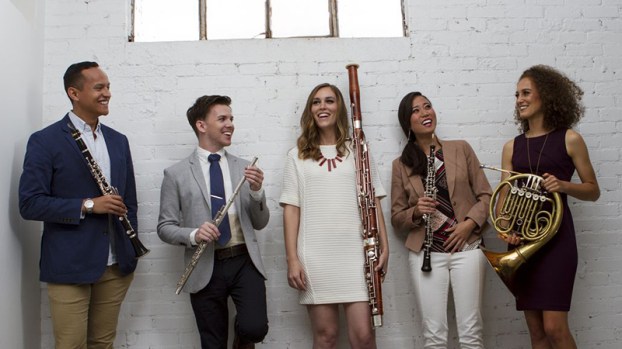 For the third program of the 2017-18 season series, the Tryon Concert Association will present the woodwind quintet WindSync at 8 p.m. Thursday, March 29, 2018, at the Tryon Fine Arts Center.

Windsync has received numerous awards in national and international competitions and they are heard widely on national public radio broadcasts. Always playing their concerts from memory, their charismatic performances include elements of staging, costumes, and choreography. Their music ranges from the classics to music of today, including jazz, folk and musical theater. The works of Leonard Bernstein, Aaron Copland and Dave Brubeck are incorporated into their music.

WindSync performances are held, not only on the concert stage but in museums, bars and national parks. Currently WindSync is the ensemble-in-residence with the Grand Teton Music Festival.

Because the group is interested in reaching underserved audiences they partner annually with organizations such as Music for Autism and Young Audiences. This Houston based group spends about 100 days of the year touring in the U.S. and internationally.

This delightful program is one of four on the TCA series for this season. Information about the entire series can be found through the Tryon Concert Association, P.O. Box 32, Tryon, NC 28782. For more information visit www.tryonconcerts.com.

Aaron Steed, international bird guide, will take us on a journey in the great room at FENCE with a spectacular... read more