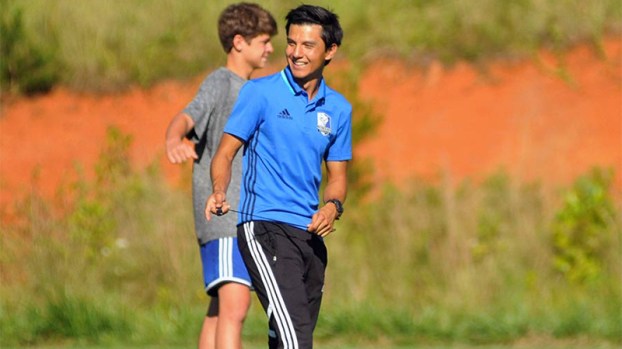 Josh Trejo learned the sport of soccer from Lennox Charles, which only adds to the sentiment of following Polk County’s all-time winningest coach as the head of the Wolverines’ program.

“He was the first person to ever coach me. We didn’t have middle school soccer then,” Trejo said of Charles, who more than 200 games before stepping down this summer as Polk County’s boys coach to lead Polk County Middle School’s program. “Coach Charles was the first person who really taught me how to do this and how to do that. He helped me go to college and develop my game.

“When I played for Coach Charles, I never dreamed in a million years that I would come back here and be the head coach. It’s almost a dream that I haven’t woken up from yet.”

Trejo hopes that dream will carry through the regular season as Polk County returns to the 1A ranks for the first time since 2008. The Wolverines enter the season, which began last week with a 3-0 loss at West Henderson and continues with Wednesday’s home opener against East Henderson, with a handful of returnees, including 2016 all-Western Highlands Conference picks Wilson Edwards and Carson Marshall, mingled with a number of new faces to match that of their head coach.

Also key for Polk County will be finding consistent scoring upfront, where the Wolverines must replace co-WHC Player of the Year Isaias Akers. Trejo plans to run a 4-3-3 attack, and will look to seniors Salvadore Chavez and Luis Hernandez and sophomore Isaac Edwards to lead that charge.

“We’re going to play a more attacking style,” Trejo said. “I really like to get our outside backs into the attack. I like to see a lot of close touches and a lot of downfield passes. We will definitely have to be very disciplined on the field. For the plan to work, there has to be discipline, with everyone going to the ball. They all have to work together, and they realize that.”

Freshman Matias Akers is expected to contribute in midfield along with senior Ethan Edwards and junior Alex Pearson. The strength of the team may be its defense, where Marshall and fellow senior John Dougherty return and will be joined by sophomores Nicholas Lopez and Sean Hudson.

“Carson is really working hard,” Trejo said. “He and John Dougherty are helping out our young defenders.”

Wilson Edwards and Jonah Wyatt have battled throughout the preseason for the starting goalkeeper’s spot.

“It’s been a delightful experience so far just because of the kids we have,” Trejo said. “They’re very respectful, they’re very coachable. They’ve welcomed me with open arms, which has been very good.”

An assistant to Charles last season as well as Polk County’s junior varsity coach, Trejo is no stranger to many in the program. With four years of experience as a club coach, he’s also no stranger to the sidelines.

The opportunity to lead his high school alma mater came sooner than expected, but Trejo has embraced the opportunity.

“I wasn’t expecting it to happen so soon,” he said. “But I will take any task. I’m up for the task and I’m ready to bring it.”