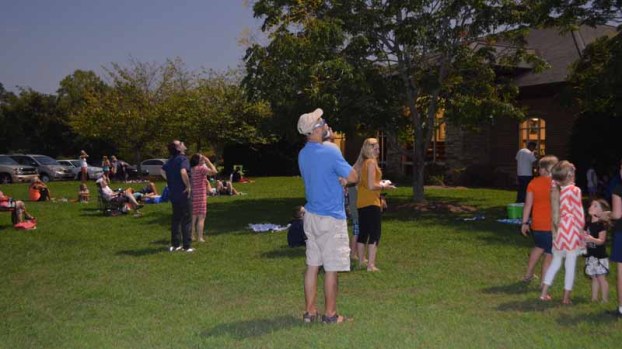 Landrum Library Branch Manager Anna Pilston said more than 200 people picked up the free solar eclipse viewing glasses at the library and went elsewhere to view the eclipse or gathered on the front and back lawns of the library to share the event. (Photo by Catherine Hunter)

“Look! Look at the shadow bands!” said Carson Guzzo pointing to a yellow blanket spread out on the ground. Guzzo and his family came to Landrum for Bobby Sarratt’s funeral Monday, August 21, 2017 and went to the Landrum Library to view the solar eclipse.

Guzzo, who is from Weaverville, N.C., said his science teacher told the class about the shadow bands that would show up on a blanket as the moon crossed the sun.

Jane Ratchford of Landrum joined Guzzo and his mother, Janie Guzzo, to witness the shadow bands and listen for the crickets that started chirping in the eerie twilight.

“I’ll never see another [eclipse],” Ratchford said. “It was beautiful. She also mentioned how much she enjoyed meeting everyone at the library. “Everyone is so friendly.”

As the light faded to a sunlit shadow, excited children ran around and others exclaimed over the sight. Staring skyward, people commented about how “cool” it was. Others called it beautiful, while exclamations of “wow” and “fantastic!” rippled through the group.

The Guzzos were not the only ones from out of town to enjoy the Landrum Library solar eclipse party. Varsha Vaishnav drove up from Rockledge, Fla. Guzzo said while they were in the busy traffic on I-26 that morning, he saw license plates from as far away as New Jersey and Delaware. 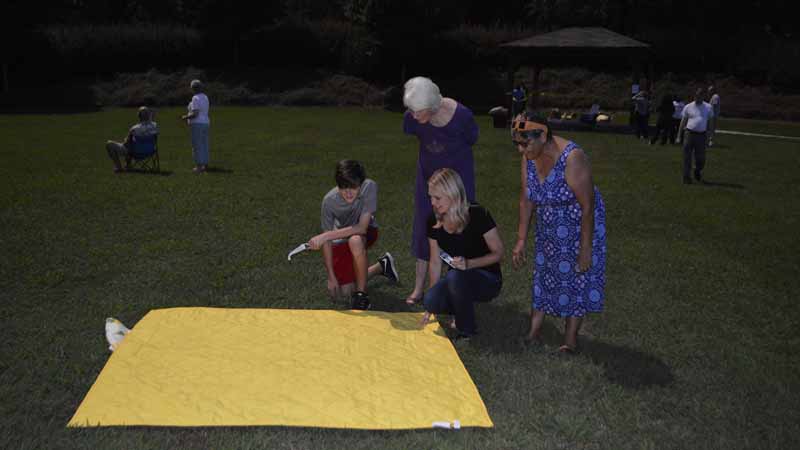 Carson Guzzo (left) of Weaverville, N.C. spread out a blanket on the library lawn to show his mother, Janie Guzzo (center), Jane Ratchford of Landrum (back) and Varsha Vaishnav of Rockledge, Fla. (right) shadow bands created by the solar eclipse.

Library Branch Manager Anna Pilston said they estimated between 200 and 250 people either came by to pick up the free solar eclipse glasses and went somewhere else to view the eclipse, or stayed for the party. The library’s Teen Assistant, Britney Hickey, ordered the donated solar glasses from Star Net, The Space Science Institute’s National Center for Interactive Learning (NCIL) which provides interactive STEM exhibits, programming, and training to public libraries nationwide.

In addition to handing out solar glasses, the library’s Tween Assistant Karen McDowell and the Children’s Assistant Melissa Gephart created fun activities for the youngsters and their parents that included moon phase Oreo cookies for the tweens, “solar slime” for the teens and word puzzles for the parents. Paige and Hannah Gephart handed out popsicles and taffy.

Landrum police officers, Jack Davis and Eric Cooper, helped out with security to be sure everyone was safe. However there was no reason for concern as the officers said everything was calm and quiet.

At least 200 people, likely many more, attended the Harmon Field Eclipse Party on Monday Aug. 21 to view the... read more