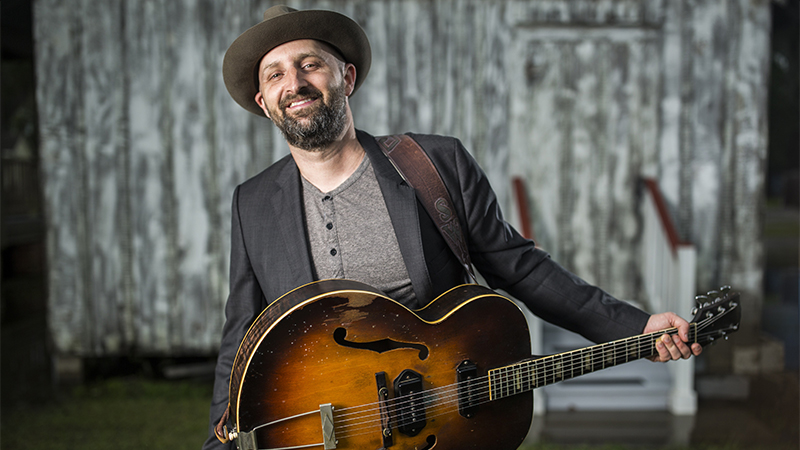 The 18th season of Tryon’s most popular summer event – Summer Tracks – continues on Friday, August 18 with Seth Walker. The show begins at 7 p.m. in Rogers Park.

Over the past 10 years, Seth Walker has become recognized as one of the most revered modern roots artists in the United States –
a three dimensional talent comprised by a gift for combining melody and lyric alongside a rich, Gospel-drenched, Southern-inflected voice with a true blue knack for getting around on the guitar.

His latest studio album, “Gotta Get Back,” produced by Jano Rix of The Wood Brothers, is yet another masterwork that further expands upon this reputation.

The son of classically trained musicians, Seth grew up in North Carolina but is currently splitting his time between New Orleans and New York City after previously residing in Austin and Nashville. Seth looks to artists like T-Bone Walker, Snooks Eaglin, and B.B. King as a wellspring of endless inspiration. He released seven albums between 1997 and 2015, breaking into the Top 20 of the Americana charts and receiving praise from NPR, American Songwriter, No Depression and Blues Revue, among others.

In addition to extensive recording and songwriting pursuits, Seth is constantly touring and has opened for The Mavericks, The Wood Brothers, Raul Malo, Paul Thorn, and Ruthie Foster, among others.

Perhaps Country Standard Time said it best: “If you subscribe to the Big Tent theory of Americana, then Seth Walker – with his blend of blues, gospel, pop, R&B, rock, and a dash of country— just might be your poster boy.”

Friday’s concert will feature Myles Weeks (bass, vocals) and Jano Rix of The Wood Brothers on drums and vocals.

As with all Summer Tracks concerts, the show is free, though a voluntary donation at the gate is encouraged. Audience donations along with the generous sponsorships of local businesses and individuals make these shows possible. Manna Cabana’s delicious fresh food and homemade ice cream, water and soft drinks will be for sale.

Summer Tracks is produced by the Town of Tryon in affiliation with Peter Eisenbrown of Blockparty Productions. For more information about Summer Tracks and the performers visit summertracks.com.