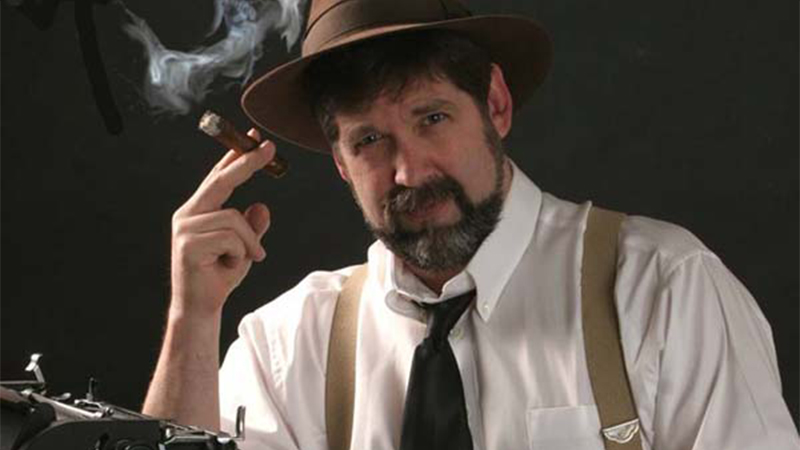 Author Mark Schwiezer presents readings and insight into the 14th book of his hilarious award-winning series, “The Lyric Wore Lycra,” on Tuesday, August 15 at noon at the Lanier Library.

Schwiezer’s mysteries, based in a small town in western North Carolina, about police chief and part-time church organist Hayden Koenig, are notable for their lough-out-loud situations despite the fact that people keep dying in St. Germaine, North Carolina.

“In the fall of 2001, I began what I hoped would be a funny little book about an Episcopal choir director/detective that had a flair for bad writing,” says Schweizer. “Now, 14 years later, that book, “The Alto Wore Tweed,” is still getting laughs and the rest of the books—bad writing aside—are winning awards and working hard to catch up.”

In 1974, Mark Schweizer, a brand new high school graduate, decided to eschew the family architectural business and become an opera singer. Against all prevailing wisdom and despite jokes from his peers, he enrolled in the music school at Stetson University. Everything happens for a reason, however, and he now lives and works as a musician, composer, author and publisher in Tryon.

“If anyone finds out what I’m up to, I’ll have to go back to work at Mr. Steak,” he says, explaining that he actually has a bunch of degrees, including a Doctor of Musical Arts from the University of Arizona. “I know! What were they thinking?” he adds.

In the field of bad writing, Mark had the distinction of receiving a Dishonorable Mention in the 2006 Bulwer-Lytton Fiction Contest, an annual contest in which the entrants compete for the dubious honor of having composed the worst opening sentence to an imaginary novel. In 2007, his sentence, now found on page 17 of “The Mezzo Wore Mink,” was runner-up in the Detective Category. This, and two other of his entries, were featured in “It Was A Dark and Stormy Night: A Collection of the Worst Fiction Ever Written,” edited by Scott Rice and published by The Friday Project.

Police Chief Hayden Koenig likes solving crimes. He likes his part-time job as organist at St. Barnabas Church. He likes typing his detective stories on Raymond Chandler’s 1939 Underwood typewriter. Hayden is good at two of these things. Crimes rarely go unsolved in the little Appalachian town of St. Germaine, North Carolina. The music at the Episcopal parish is top notch. His writing however ….

Fat Tuesday: the only religious holiday for the horizontally challenged. It’s only natural that St. Barnabas Church should offer a Lenten class called “Paunches Pilates.” As the gang ponders forty days of penitence and self control, it becomes clear that there is a murderer in town. Ashes to ashes, dust to dust — will they ever get this mess cleaned up?

From The Lyric Wore Lyrca