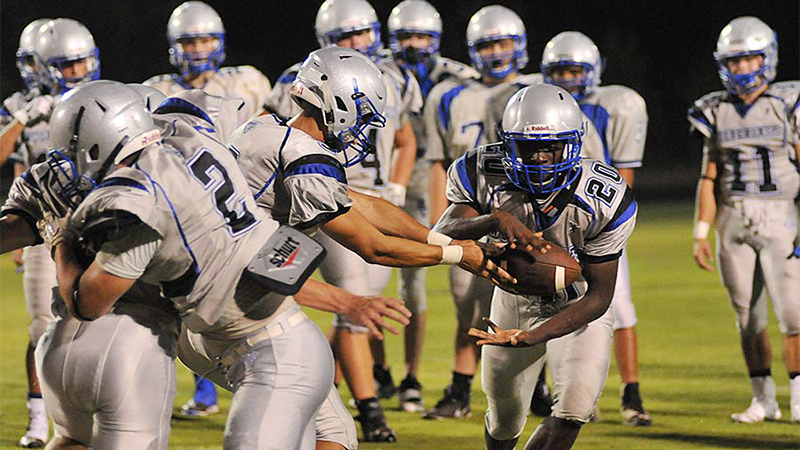 Polk County will offer fans a preview of its 2017 season as the team hosts its annual Wolverine Jamboree football scrimmage tonight in G.M. Tennant Stadium. Action will begin at 6:30 p.m. with Hendersonville, North Henderson and East Rutherford slated to participate. Polk County will conclude its preseason schedule on Friday, Aug. 11 traveling to Bessemer City where action will begin at 6 p.m., with East Rutherford also in attendance. The Wolverines open the 2017 season at home on Aug. 18 against Chase. (Submitted by PolkSports.com)

“Two minutes,” head coach Bruce Ollis finally shouted, and soon the sizeable crowd gathered in G.M. Tennant Stadium could shake away thoughts of sleep and view what they had come to see.

Full-contact football – pads popping, blocking and tackling, the sights and sounds of another season soon to begin.

During the almost 90-minute session on W.J. Miller Field, the Wolverines rolled through a series of individual and limited-player drills before ending the morning’s activities with a full 11-on-11 scrimmage, another step toward the home and regular season opener on Aug. 18 against Chase.

“Very pleased with the effort and very pleased with the crowd,” said Ollis, back as Polk County’s head coach after spending the last three seasons at T.L. Hanna. “Everybody on the field got at least 10 plays tonight, and that was our goal. Everybody will be able to see themselves on film and that will give us a chance to correct any mistakes we might see.

“I haven’t had a chance to see these guys hit before. I found out we’ve got some physical players. It was not a bad first day of hitting.”

The early-morning practice also marked the end of the first week of preseason camp. Week two will be a busy one as Polk County will host a four-team scrimmage on Wednesday, Aug. 9 at 6:30 p.m., with North Henderson, Hendersonville and Eat Rutherford coming to G.M. Tennant, before travelling Friday to take part in the team’s final preseason tuneup.

Ollis is pleased with how the Wolverines fared through that first week.

“We got through the week injury free, so that’s a good thing,” he said. “All the players came to practice. We’ve been going out at 7:30 each morning, so that’s been good to see. And we ended up this morning with a good scrimmage.

“I saw some young guys who have got to execute a little bit better, but I saw a lot of great things from our first-team offense and our first-team defense. Those are a lot of the same faces on the field, but they know that and they’ve been working hard preparing for that.”