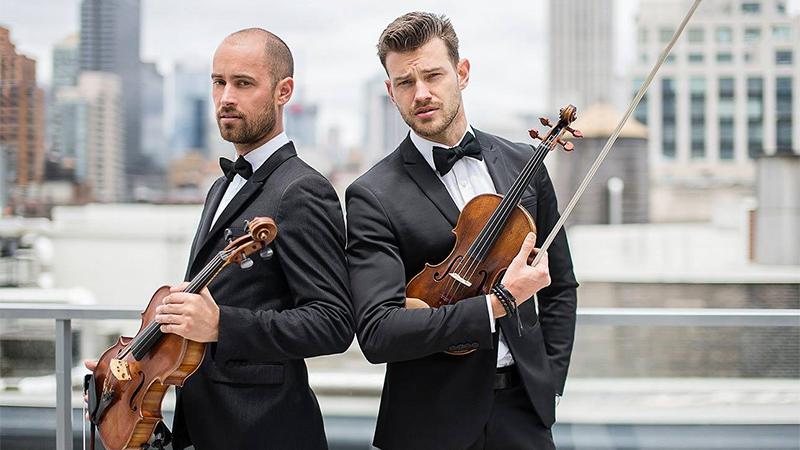 Violinist Filip Pogady fits the “child prodigy” moniker in every way. His background and accomplishments are well described in our program for Aug. 6, but what he has chosen to do with his multiple gifts is remarkable. Along the way, a serendipitous moment brought Filip to Landrum with the Charleston Virtuosi last February. The applause for the quartet’s Music in Landrum performance of “American String Quartet” by Dvorak was thunderous, but what happened after the performance was the best thing I have ever experienced.

Over 100 waited patiently to meet the foursome, and eat delicious low country treats. Among those patiently waiting were many young children, some who play the violin in a Suzuki program with Donis Schweizer of Tryon. The musicians spoke with each and every guest, and stayed to the end of the lovely gathering. Elsewhere in the cavernous gym at Landrum United Methodist Church, folks sat together and chatted over their food.

I asked Filip and Fabio Parrini, who will dazzle on the piano on Aug. 6, about performing in a small city such as Landrum when their talent takes them all over the globe.

Filip replied, “I really like the sense of community. In classical music concerts, there is often a distance between the artist and the audience, but in Landrum, they get to meet at an informal get together after the concert. I think that’s terrific! There is real enthusiasm amongst the concertgoers! Also, I really enjoy the acoustics in the church. Not too boomy, but not too dry either. It’s just right!”

We believe that all who attend on Aug. 6 with Filip and Fabio, and any other free Music in Landrum performance over this season and into the future, will meet a new friend, have 50 minutes of peace of mind, receive hope and gratitude just from sitting and listening, and get Belgian dark chocolate pianos and violins to take home! •