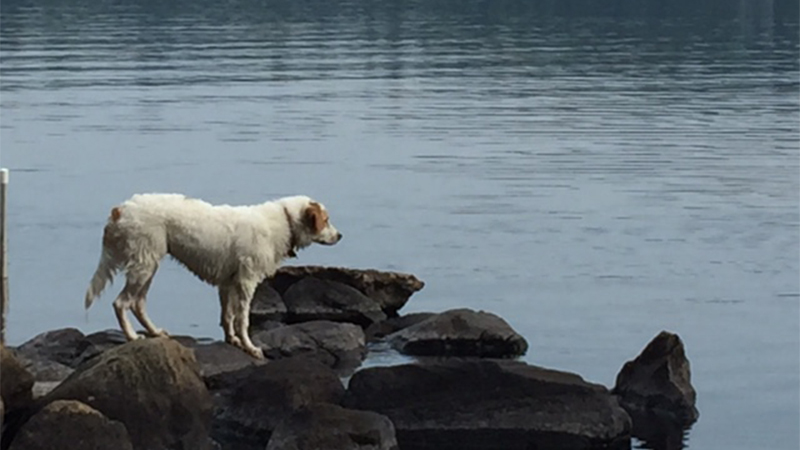 There are circumstances when commonly called “vintage phrases” come across as entirely appropriate. Thus the phrase “Third time’s a charm” in regards to a puppy repeatedly adopted at Foothills Humane Society. Two rather large pups, ultimately named Pastrami and Pepperoni, were brought to the shelter by Polk County’s Animal Control officer. Although Pepperoni was considerably larger, both sported semi long white fur with patches of tan randomly scattered across their expressive faces.

Pastrami was adopted by two women curious about their pup’s genetics and the test results they acquired proved she is predominantly Golden Retriever. But there is also Labrador in there somewhere along with Great Pyrenees which accounts for her surprising size. Since leaving the shelter Pastrami has intelligently advanced with obedience lessons which she proudly exhibits upon returning to visit staff.

Slower to become adopted, Pepperoni was fostered in a home with horses and a number of rescued dogs, learning well to get along with other animals and to trust humans. Adopted out twice, he was returned shortly thereafter each time. The first family had a grandchild who expressed jealousy over attention showed the dog, and the second couple had never owned a dog but quickly discovered they are highly allergic. Although both adopting families regretted returning Pepperoni, it allowed for Marcia and Don Lorenz to provide that “third time’s a charm” scenario to come into play.

Pepperoni, now called Finn, spends his time this summer with a Flat Coat Retriever romping in the water of a Michigan lake. Marcia says that both are slow to exit the water, and well, that just proves those retriever genes in Finn for sure. Both Marcia and Don say with enthusiasm that Finn is a wonderful, intelligent pet, well behaved, happy to take a spin around the lake in the boat or travel in the car, truly full of love, and richly adding to their family life.

The success of Finn’s final adoption has been testament to the important role that foster families play, dedicated to giving each animal a healthy, structured start to life. So if you have the heart for it and time to foster an animal this summer, we would love to place one or two in your care. It would just be one piece to the puzzle that helps each animal develop a well rounded personality, ready to offer what often is labeled unconditional love. The sweet and gentle disposition found in Finn is just more “proof in the pudding”. See………. there’s another one of those phrases.

We hope to see you soon!