Municipal election will have council races in all three towns

COLUMBUS– Filing for the 2017 municipal election has ended and there will be races for council seats in all three Polk County towns as well as two mayor races.

Filing ended on Friday, July 21 at noon with John Fowler filing on Friday to run for the special Tryon Council seat to finish out former commissioner Roy Miller’s term and incumbent Richard Hall filing to retain his Columbus Council seat along with Robert Williamson filing for Columbus council.

Filing has been ongoing since July 7 for the towns of Columbus and Tryon and City of Saluda.

Incumbent Columbus Mayor Eric McIntyre will run unopposed but there are six candidates to fill three council seats. Incumbents Mark Phillips and Hall are being challenged by Ernie Kan, Brent Jackson, Marshall “Buddy” Watkins and Williamson. Denton’s seat is also up for re-election. 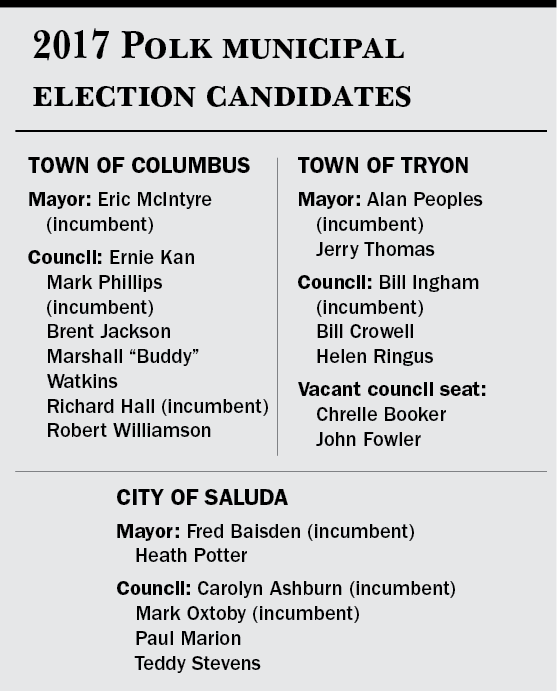 Tryon will also have races for its mayor, council and the special council seat that is for a two-year term to fill the vacancy.

The other open seat in Tryon has Chrelle Booker running, who was appointed to fill the seat until the election, as well as Fowler who filed to run.

The general municipal election will be on Tuesday, Nov. 7.