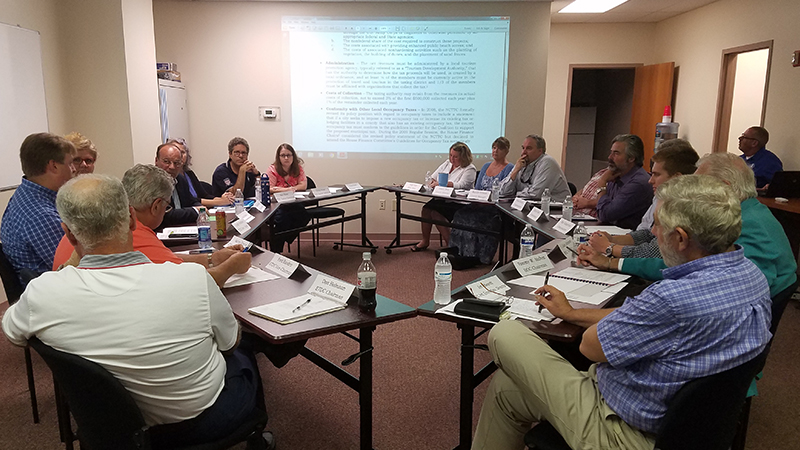 County officials had a discussion this week about how the county can ask the state to collect a six percent tax on lodging in unincorporated areas of the county instead of the current three percent tax.

The obstacle could be that the only way for the county to increase its tax to six percent would be to get its three towns on board to rescind their occupancy taxes and join the county’s TDA.

The county will first ask the state if it can collect the maximum six percent tax in the unincorporated areas of the county, but that option may not be successful. The other option is to get the three towns to join the TDA. If a joint TDA were formed with the towns, the TDA would collect the tax for the entire county and decide how to distribute the money.

According to members at the meeting, the positives would be that the county on a whole would be collecting more occupancy tax with the county collecting a total of six percent in unincorporated areas. Being allowed to collect six percent instead of three in the county will also level the playing field for lodging establishments.

Currently, the towns and county each collect three percent in the towns so lodging in the towns charge double the tax than lodging out in the county. The towns could also save money because the TDA would collect the tax.

The county is in a bit of a time crunch because it wants to capitalize as much as it can on lodging that will be done for the World Equestrian Games (WEG) at the Tryon International Equestrian Center (TIEC) slated to be held in September 2018 and the change will require state legislative approval.

Even if the change were approved, the occupancy tax within town and city limits would remain the same as it is currently, at a total of six percent because the towns currently collect three percent and the county collects three percent.

Polk County Commissioners met jointly for a work session with the Polk County Economic Tourism and Development Commission (ETDC) on Monday, July 17 and discussed the county’s options to collect more occupancy tax in the county.

The ETDC board invited Vince Chelena, executive director of the N.C. Travel Industry Association, to the work session to review the county’s options. Polk County Travel and Tourism Director Melinda Massey said she invited Chelena to the work session because the N.C. Travel Industry Association is the organization that wrote the documents on occupancy tax for the state.

Chelena reviewed the laws and guidelines on the state level, with the first law passed in 1983. He said it was hotels that came to the state at first saying they wanted to tax themselves to promote their destinations and communities. The tax worked well but after a while, Chelena said, municipalities began using the occupancy tax funding to pay bills and other expenses not related to tourism.

The guidelines basically say that 2/3 of the money collected from lodging should go towards promoting travel and tourism, including for advertising, creating brochures, paying staff and office space, etc.

The other third must be used for tourism related expenditures. Chelena said some municipalities have used that for infrastructure, renovating halls for people to gather, sidewalks, bike racks and trails.

Chelena said what cannot be done with occupancy tax is building infrastructure such as a water tower.

Don Hofmann, with the ETDC, said when commissioners and the ETDC met jointly in February, the boards discussed a promotional opportunity associated with the World Equestrian Games (WEG) and how the county could fund that. The thought at the time was to fund that through tighter administration of the occupancy tax collection. County attorney Jana Berg said in February that one way to do that was to transfer to a TDA and possibly increase the occupancy tax, according to Hoffman.

ETDC member and Saluda Mayor Fred Baisden asked if the county is talking about creating a whole new board of people who are going to be determining how this occupancy tax will be administered.

Polk County Commissioner Ray Gasperson said Tryon and Columbus currently collect three cents and Saluda will soon. Gasperson said the county will have to be inclusive with the towns.

Massey said for point of reference, the counties of Rutherford, Henderson and Buncombe collect the tax together through a TDA.

“We’re a little bit unusual for having both the town and county occupancy tax,” Massey said.

Hofmann asked if the TDA is established, who would be responsible for hiring and firing employees.

“They become their own entity,” said Pittman.

Pittman said one of the challenges is going to be getting all the towns on board before the WEG.

Gasperson said he agrees it will be difficult.

“But think about how much money you are leaving on the table,” Gasperson said.

Melton said he thinks it should at least be up for discussion.

If a TDA were established, likely in a year or so the county could fully fund all staffing and collections through the occupancy tax. The TDA would collect the occupancy tax, which would also save the towns from having to collect it.

This fiscal year, which began July 1, the county had to use general fund money to increase hours for a current position in the tourism department.

Interim county economic development director Jim Edwards said right now the county is leaving its collection resources on the table because that is not an eligible expenditure.

Pittman said with a TDA it would give the county more flexibility on spending the occupancy tax.

“You’re having to use general fund dollars to collect the tax,” Edwards said. “You could be (with a TDA) using tourism dollars.”

Massey said with TIEC and WEG coming up the amount of administration keeps growing and it’s getting much more complex to keep up with.

Melton asked what would be the negatives for the towns in joining the TDA.

Pittman said the loss of the control of the funding.

Massey said each town has its own personality when it comes to spending occupancy tax. Some towns are more focused on events, she said, while others may want public restrooms. Massey said Tryon is already organized as a TDA so they are familiar with this structure already.

Pittman said the county could pursue the TDA on its own now and if the towns want to join later they could.

Chelena also said he’s never seen a situation in the state where the county is allowed to collect six percent (in its unincorporated areas) and the towns collect three percent.

Massey said either way the county needs to change to a TDA, adding the way the county is set up now, it is limited to spending its occupancy tax on tourism promotion only.

Berg said she thinks the county should first approach state legislators about taxing six percent in the unincorporated areas. That’s the win-win, she said.

Commissioner Myron Yoder said if the towns could see the advantages and what it would do to help them, they may get on board.

“I just hate to see that money left on the table,” Yoder said.

Melton said he wants to make sure the county includes the municipalities in the conversation. He also suggested contacting Henderson County to ask questions about their occupancy tax collections and administration.

Pittman said he is contacting the towns this week about the discussion.