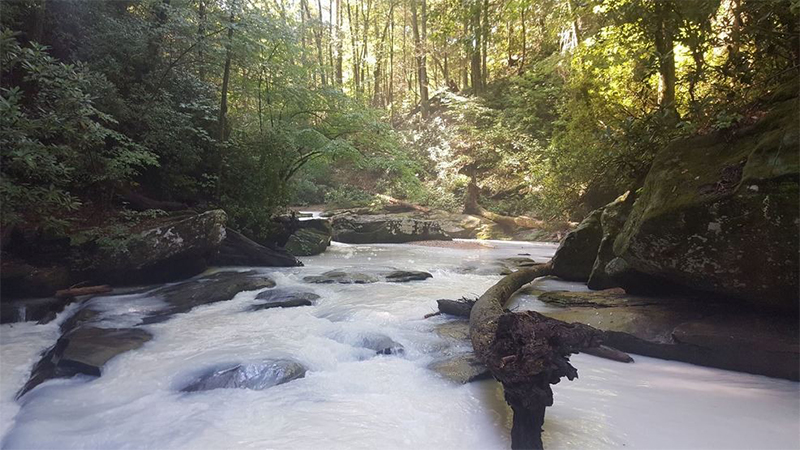 About 12 fish were killed in Cove Creek after a tanker overturned on I-26 spilling milk into the creek on July 1. The N.C. Division of Water Quality in Asheville is investigating whether to issue a penalty to the truck company. (photos submitted by Bobby Arledge/Polk Emergency Management Director/Fire Marshal)

SALUDA – Milk that spilled into Cove Creek on Saturday, July 1 resulted in the death of approximately a dozen fish, according to the N.C. Division of Water Resources in Asheville.

Zan Price, with the division of water resources, said his office was notified on the morning of the spill and two staff persons responded to the scene.

“There was an environmental truck that removed the milk from the drainage ditch, but it was already in the creek,” Price said. “They looked at Cove Creek, which is a tributary to the Green River. Our staff didn’t see any dead fish.” 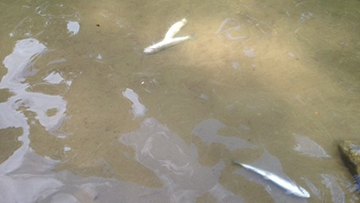 But later, in talking to a N.C. Wildlife officer, Price said they were told the office noticed less than 12 fish dead.

Price explained that milk has a high biochemical oxygen demand (BOD) and as it breaks down it can remove oxygen from the water.

The division went back to Cove Creek the following Monday to review the creek, as well as the Green River and Lake Adger and didn’t see anything, Price said. Price said they also spoke to a fisherman who said he had not noticed any dead fish.

“It’s an isolated incident,” Price said. “We’ll investigate whether to issue a penalty to the truck company.”

A tanker truck hauling milk overturned just before 7 a.m. on Saturday, July 1 along I-26 East near Holbert Cove. The truck spilled approximately 6,000 gallons of raw milk along I-26, which flowed from storm drains into Cove Creek.

The N.C. Highway Patrol cited unsafe speed for road conditions as the cause of the wreck.