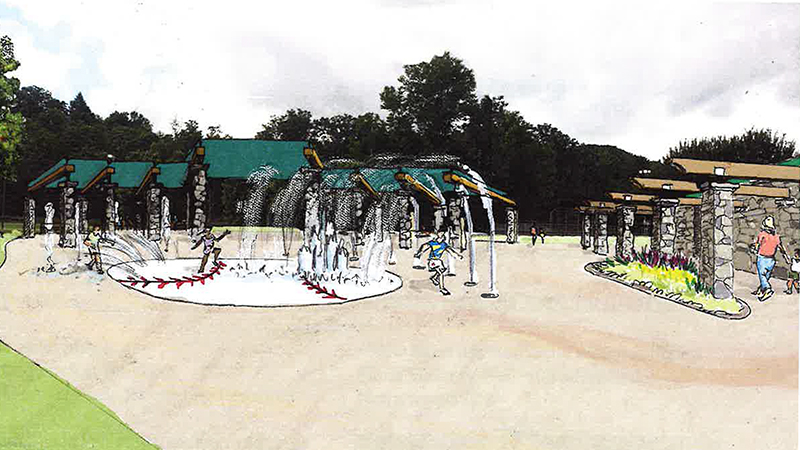 Artist renderings of the splash park, bleachers and sculpture plaza proposed as part of the Dallara project at Harmon Field. (Renderings submitted by Town of Tryon)

TRYON – The Harmon Field Board of Supervisors voted to approve the Dallara Project at Harmon Field with a few stipulations, and Tryon Town Council tabled its support until further research.

At council’s June 20 meeting, members discussed the stipulations put forth by the Harmon Field board at their June 1 meeting. 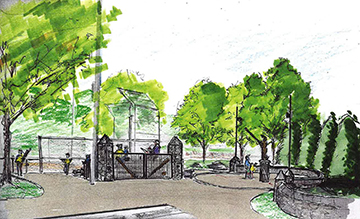 The stipulations from Harmon Field include:

The escrow endowment account for annual facility maintenance must be fully funded before proceeding with phase I construction;

That all elements of the project be completed before the installation of the Harry Dallara statue;

To eliminate the proposed large “Harry Dallara Baseball Park” entrance sign and instead permit one sign no larger than 12-inches by 12-inches at the statue;

Revision of the project scope and design to increase the size of the improved ball field to a regulation size that would accommodate adult softball games;

The addition of an option for Harmon Field and the town, before phase 3 construction proceeds, to change the water park element of the current project proposal to alternative park improvements for children at Harmon Field if liability, operating and maintenance issues of the proposed water park became prohibitive, allowing for use of the water park funding and maintenance endowment funds for these alternative park improvements.

The Dallara project has been planned for several years in honor of Harry Dallara, of Spartanburg, who loved to play baseball at Harmon Field. Dallara died in 2012. The Harry Dallara Foundation is attempting to raise approximately $1.4 million to create a statue of Harry Dallara, make baseball field and spectator area  improvements, create a splash park, and include a tribute to the Tryon All-Stars.

The original estimates for construction were $1.025 million with the foundation also planning annual incremental maintenance endowments to Harmon Field of $20,000.

One of the issues about the project is over who has final control of what happens at Harmon Field, the town board or the Harmon Field Board of Supervisors.

Commissioner Bill Ingham asked how many years the foundation plans to contribute money for maintenance.

Ollis said the number has changed but it was going to be $20,000 a year until a certain amount was reached.

Ingham said if that’s the case the stipulations don’t seem unreasonable to him.

“The statue will probably be the last thing to go in anyway because of the time,” Ingham said. “The sign I definitely agree with. It is still Harmon Field.”

Ingham also said he prefers not to have a water park.

Commissioner Crys Armbrust said he would go as far as to say the stipulations are an attempt to kill the project.

“It is an outright gift of $1 million of an upgrade to that recreation facility,” Armbrust said.

Commissioner Bill Crowell said he’d like to see the field expanded to adult use and wants to be sure other things are in place before the statue goes up.

Local sculptor Will Behrends is creating the statue of Harry Dallara.

Tryon Mayor Alan Peoples said the town owns Harmon Field and if the town doesn’t like what’s going on, it can take the statue down.

Ingham said he doesn’t take opposition to the Harmon Field board’s stipulations. He motioned to approve the project, saying they need the stamp of approval from everyone for fundraising.

Armbrust said he thinks the town should defer the vote until the attorney gives an opinion on who has the final say for improvements at Harmon Field.

Resident Steve King said he’s been going to Harmon Field meetings for 10 years and although he missed the last meeting, the project was going to cost close to $2 million. King said the Dallara Foundation was supposed to fund everything before they started and the Harmon Field board was not willing to let them start with the $300,000 the foundation had in the bank because that wouldn’t even cover the long-term maintenance.

“The Harmon Field board is doing their due diligence that they don’t want the project to be started and not finished,” King said. “If that money is not upfront, I don’t blame them for dragging their feet on this.”

Ingham said it’s a Catch-22 and he understands what King is saying. That’s the reason they set it up in phases, Ingham said. On the other hand, he added, it’s hard to raise money for something they don’t have approval for.

Resident Mary Prioleau said that water features are being closed all across the country because of the liability.

Council tabled the discussion until a later date. Tryon Town Council does not meet in July. The next meeting is scheduled for Tuesday, Aug. 15.