What to do about Bob? 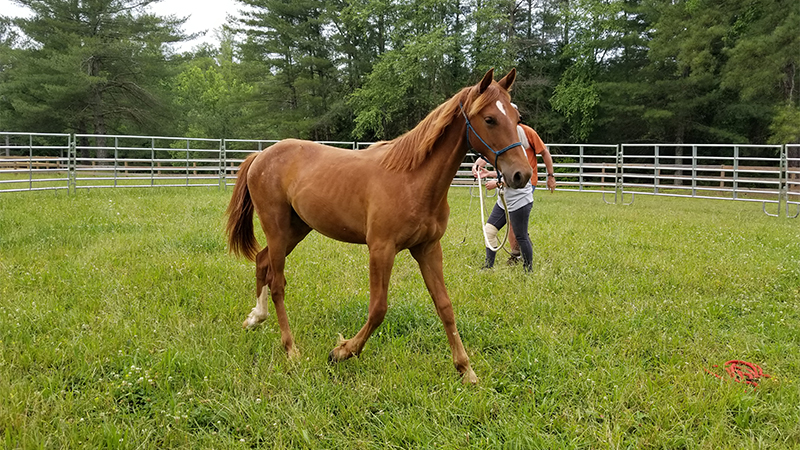 Bob as a gelding

Bob arrived here with his mother, a beautiful red roan appaloosa named Red October, after being saved from a kill pen in Louisiana. Luckily, they were rescued just like I was, by Helping Equines Regain Dignity (HERD) based here in Tryon. A generous lady named Joyce Lamb donated the money to buy them and get them back to North Carolina. Their return trip north was in a comfortable horse trailer with their own box stall.

Wide-eyed and scared of his own shadow, Bob arrived to us as a tall, lanky chestnut colt. He will transform over time to be a red roan. He has a sprinkling of white spots that will one day cover his rump as an adult. His long legs would be the envy of any racehorse or line dancer. Bob sticks to his mother like glue. But now as a yearling, he will soon need to leave her side as she is going to a new and wonderful home outside of Columbia, S.C.

It is now time for Red October’s departure to her new home. She loaded readily into the horse trailer with ease and confidence. Upon her departure, Bob is moved into the small paddock by the barn so that he can be watched more closely and given extra attention. This is the paddock I used to live in when I first came.

Like Bob, I wanted nothing to do with people. He is clearly perplexed and lonely without his mother but we are here for him. Inca, Certain and me. My role here these days is to be the welcoming mascot and pasture companion. We talk across the fence constantly to keep his spirits up and explain that Red October has gone to a wonderful farm. She will start riding lessons soon.

One thing is also changing for Bob now. His hormone levels are rising and he has a one-track mind thinking about breeding the mares here on the farm including me. In fact, he escaped his pasture into mine following the tractor through the gate. Bob chased me for a good eight minutes before Charlie and Heather got him back in his paddock. His behavior is a clear sign that it is time to schedule his gelding appointment with Dr. Butterworth.

On the big day, Debra holds Bob still as the vet approaches. She strokes his neck, distracting his attention while Dr. Butterworth administers the sedative to prepare him for his gelding procedure. Bob goes down easily and in just a few minutes the deed is done. Scott Homstead, one of the founders of HERD, is right there to trim Bob’s hooves while he is sedated, as he has not yet accepted surrendering his feet for farrier work yet.

Soon, Bob wakes up rises slowly to his feet in a wobbly fashion. The people involved in the gelding are pleased with how well it went, but Bob has a different opinion. He has a look on his face that says, “Hey, what just happened?” He has no idea, but his whole life will change for the better.

He is soon his old self again, curious about everything and devoted to his feed bucket. He has lost interest in the mares now, which is good for me. Then one breezy afternoon, Debra, Heather, and Scott take Bob for a walk down the road to Edge Brewing Rescue barn. Heather led her trusty gelding Certain ahead of Bob to show him the way. Bob is going to live at Edge to grow up and enjoy a bigger lush pasture with a young pasture mate, Morgan. Debra will continue his training with Rick at this new location. I will not see him again until he returns here to start training in the big riding ring, in a few years. Certain reported to me it was a very nice place for Bob to grow up. •