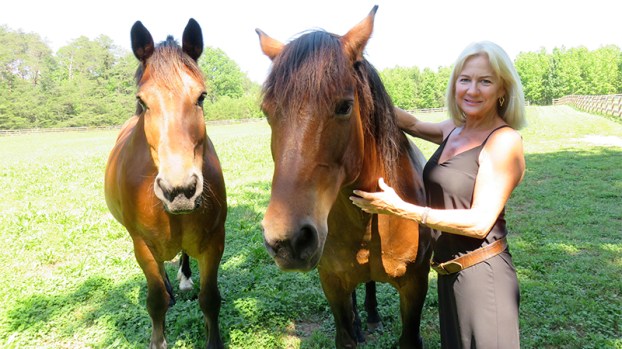 Marianne and Bella at home with a friend’s draft cross. (photo by Judy Heinrich).

The Mongol Derby, Ride of a Lifetime

Endurance competitors cover 50 to 100 miles in a single day on a single horse, within allotted times of 12 to 24 hours, depending on distance. There are several mandatory vet checks during rides, to ensure horses are fit to continue and give both rider and horse an hour or so to rest, re-hydrate and eat. Out on the trail, competitors encounter all kinds of terrain in whatever conditions the weather gods decree, from freezing cold to blistering heat, pouring rain and thunderstorms, or some combination. And if they’re lucky, cloudless skies to light the dead-of-night trails. For riders who can’t get enough, there are “Pioneer Rides,” with multiple days in a row of endurance riding for combined distances of at least 150 miles.

It’s no wonder endurance riding is considered an extreme sport. But for Marianne Williams of Tryon, your typical endurance rides just aren’t extreme enough. In August she’ll be competing in the Mongol Derby, deemed the world’s longest and toughest horse race by the Guinness Book of Records. It’s in Mongolia, of course, a landlocked sovereign state in East Asia that’s bordered by China to the south and Russia to the north. The Derby is 1,000 kilometers long – that’s 621 miles – and riders have 10 days to complete it, preceded by three days for navigation and survival training, and meeting the horses.

Unlike typical endurance races for which courses are well marked by friendly florescent ribbons, the Derby course isn’t marked at all. In fact each year’s course is kept secret until right before launch. But you can be sure the riders will experience every type of Mongolian terrain, from high passes, open valleys, wooded hills and river crossings to wetlands, floodplains, sandy semi-arid dunes and, of course, “open Steppe” – the expansive grasslands that cover most of the country.

And forget the trusting longtime bonds that endurance riders invariably have with their horses: Mongol Derby riders are on half-wild Mongolian horses that they switch out every 25 miles. Fresh horses are provided at 25 stations along the way, with choice of horse on a first come-first served basis. So if you’re in the back of the pack, you choose from the horses nobody else wanted.

If anyone could possibly question the grueling nature of this experience, consider this description from Derby organizers: “No marked course, no packed lunches, no shower block, no stabling, possibly a GPS. Your chances of being seriously injured or dying as a result of taking part are high. You are really putting both your health and life at risk – that’s the whole point.” So what in the world possessed Marianne to say, “Sign me up”?

Marianne has always had an adventurous streak, she says, despite being raised by “ordinary suburban parents.” Her dad was a banker and they both played bridge. But her dad, now 94, was a World War II vet, shot down over Germany and captured as a POW. “I think I got all of my adventurousness from him,” Marianne says.

Growing up in Panama City, Fla., it was easy to find work that combined fun and adventure. Some of Marianne’s jobs were bartending, scuba diving, hunting, spear fishing and piloting small planes. Then when a company came to town looking for experienced divers to go to Europe, Marianne said she “didn’t get the job but did get the captain.” They got married and moved to Maine to start a commercial diving business harvesting sea urchins for the Japanese market. They raised two sons who Marianne home schooled aboard ship. “I was the primary parent because my husband worked in the Bering Sea for part of the year.”

One childhood dream Marianne hadn’t fulfilled at that time was exploring the country by horseback, “being like Kit Carson and Daniel Boone.” Then, when her second son left home for prep school she said she cried for three days. And stopped crying when she suddenly thought, “I should get a horse.” Divorced by that time, she headed west.

Once there, Marianne went to a BLM auction and bought a mustang mare that was on its third strike, having been tried and returned by two previous adopters. “I went with an untrained mustang rather than a trained, experienced horse because I wanted to start with a clean slate,” she explains. “I never wanted to do any showing, I always wanted to ride outside.”

Saying she learns things best by doing them rather than taking lessons, Marianne spent a half-year on a ranch out in New Mexico, riding six days a week with the working cowboys. “I got to ride a bunch of their horses, I rode horses from a string that guests could ride, and I took my mustang, Bella, out with them a lot,” she explains.

When her time at the ranch was up, Marianne bought a place and got into endurance riding. “I liked it because you can ride a long distance but know you’ve got a route to follow, companions there, vets to help you monitor and care for your horse – there’s a certain amount of security.” Marianne started with “Limited Distance” rides of 25-35 miles before moving up to official endurance distances of 50, 75 and 100 miles. Between her first mustang “Bella,” a mustang gelding “Applejack,” and an Arab gelding, “Aabsolut Bling SF,” she was soon placing regularly among the top 10 finishers.

Then she also got into Pioneer Rides. “I like those multi-day rides the most,” she says. “The fitness level you need is a testament to both horse and rider.” Her longest Pioneer was five consecutive days of 50s at the Grand Canyon XP ride, three on Bella and two on Bling.

Marianne’s most recent endurance ride was a 55-miler at the Biltmore Challenge FEI ride in May, which she and Bella completed in eight hours. And she rides just about every day, on her own horses or those of friends who board with her, directly from her Tryon farm onto the FETA trails.

As of early June, 36 riders were scheduled to compete in the Mongol Derby, eight from the U.S. and four of those from the Carolinas! In addition to Marianne (age 54), there are Julia Fisher (65) from Hartsville, S.C.; Rachel Land (38) from Easley, S.C.; and Clare Summers (59) from Pendleton, S.C. Rachel and Clare will be riding as a team while Marianne and Julia are planning solo rides. The four women know each through endurance and, Marianne says, “We’re all in it to win it.”

All of the international riders are planning to meet ahead of the race in Mongolia to see some of the country’s cultural sites before their training and the Derby itself. According to organizers, Derby riders will be supported by teams of vets, medics, drivers and interpreters, and each rider will wear a tracking device so friends at home can follow their progress.

The Derby runs from August 9-18 and you’ll be able to get general news and follow Marianne’s progress at MongolDerby.com. We’ll also be talking to Marianne once she’s back in Tryon, to hear more about her adventure and share those details in a future issue of Life in Our Foothills.