SALUDA – The Polk County Sheriff’s Office PACE (Polk Aggressive Criminal Enforcement) Team in conjunction with the N.C. State Bureau of Investigation (SBI) and the South Carolina Law Enforcement Division arrested a fugitive out of South Carolina this week who was wanted for drug trafficking.

The arrest was made at the Saluda Mountain Lodge on Tuesday, June 27. 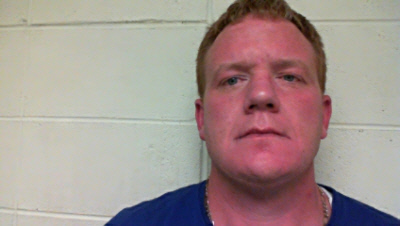 Michael John Powell, 38, of Greenville, S.C. was arrested after being wanted in South Carolina for drug trafficking, according to sheriff reports.

The arrest was made without incident, according to the sheriff’s office, after officers did surveillance at the lodge after Powell left and arrested him as he returned.

“The suddenness and surprise of the officers’ approach allowed the arrest to be made without incident,” said Capt. Lowell Griffin with the Polk County Sheriff’s Office.

The Saluda Mountain Lodge cooperated to aid in the arrest, according to the sheriff’s office.

Powell was in possession of a stolen handgun out of Spartanburg, S.C. at the time of the arrest, according to the sheriff’s office, and methamphetamine, which was packaged in a manner to distribute.

Powell was arrested and processed as a fugitive from justice. He was turned over to South Carolina authorities on Wednesday, June 28.

Polk County has pending charges against Powell for the stolen handgun and methamphetamine, Griffin said.