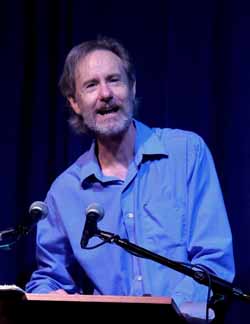 New York Times best-selling author Ron Rash spoke to approximately 200 people who attended the June 11 Lanier Library Annual Meeting at the Tryon Fine Arts Center. Dubbed “our Appalachian Shakespeare” by The Washington Post, Rash enchanted those who attended the free event with tales of growing up in and around the mountains of North Carolina, and described how that influenced, and continues to influence, his writing. The author signed books and talked with attendees at a reception at the library following the event, made possible by a Kirby Fund Grant from the Polk County Community Foundation. (Photo by Harry Goodheart. Submitted by Amber Keeran)