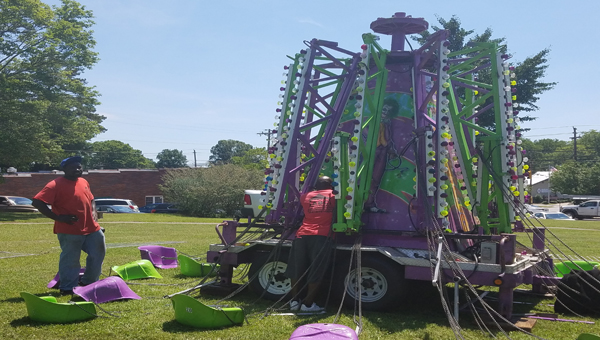 ABC Party Rentals has been setting up amusement park rides this week at Stearns Park for the Fabulous Fourth of July celebration in downtown Columbus on Tuesday, July 4. The rides will be open Monday night and all day Tuesday. New this year to the rides is an American Ninja Warrior type course. (photo by Leah Justice) 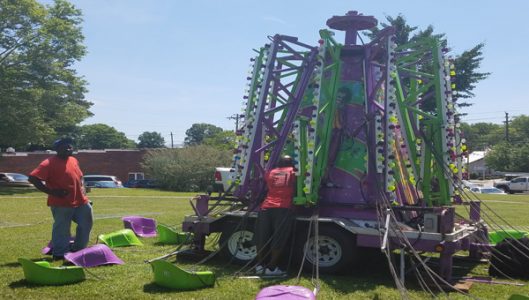 ABC Party Rentals has been setting up amusement park rides this week at Stearns Park for the Fabulous Fourth of July celebration in downtown Columbus on Tuesday, July 4. The rides will be open Monday night and all day Tuesday. New this year to the rides is an American Ninja Warrior type course. (photo by Leah Justice)

The Town of Columbus is celebrating its 55th year for the Fabulous 4th festival and will offer a day full of music and entertainment for everyone! The Fabulous 4th will be held on Tuesday, July 4. The planning committee has scheduled many performances and events for the whole family for all types of interests. The day is filled with music, kid’s games and rides, food, crafts, vendors, Antique Car Show, Polk County Farmers Market, Polk County Historical Museum and much more!

The 4th of July kicks off at 10 a.m. with the opening ceremony, which includes the presentation of the colors by the Polk County Honor Guard followed by the National Anthem sung by Anita Williamson. The stage will be filled with local community talent beginning at 10:10 a.m. with Joyful Noise, a family youth Gospel group and at 11 a.m. with Patrick Ballard performing guitar blues, patriotic songs and banjo tunes.

The Antique Car Show will run from 10 a.m. – 3 p.m. on Gibson St. adjacent to the courthouse. The event is sponsored by the Little Detroit Club of the Great Smoky Mountain Region Car Club. People’s choice awards will be presented at 3 p.m. Stop by during the day and vote for your favorite antique car.

The farmers market will be set up on Main Street and will run all day beginning at 10 a.m.

Kids games will be set up on the lawn of Stearn’s Park and run from 10 a.m. – 2 p.m. The family fun and games are sponsored by Cross Roads Baptist Church.

The amusement rides will be operating on Stearn’s lawn from Monday, July 3 from 5-10 p.m. and on the 4th from 10 a.m. – 10 p.m.
The Polk County Historical Association Museum located at 60 Walker St. will be open from 10 a.m. – 4 p.m. Admission is free for the 4th of July. Special children’s activities, and children’s programs on old fashioned toys, will run throughout the day. The WWI centennial display will feature Polk County’s “Doughboys,” picturing over two dozen Polk men who served and dozens of artifacts. Guides will be available to assist you with genealogy questions. A gift shop is on-site as well as much more.

The veteran’s hour will start at noon and will be held at the Doughboy statue in front of the Historic Columbus Courthouse to commemorate the statue and honor those who served in WWI. The flag will be raised on the newly installed flag pole behind the statue as part of the ceremony. In addition, the American Legion and VFW members will present during the veteran’s program.

At 1 p.m., Michael Crisp will sing and play guitar to your favorite oldies and contemporary music. At 2:30 p.m., Meghan Woods, the country western singer, will perform originals and covers.

Bands will begin at 4 p.m. and play through 9:45 p.m. The stage will be filled with a variety of bands playing blues, country, rock, and originals.

Come out and share in the fun at the Hometown Fabulous 4th of July celebration in Columbus!

10:00   Opening Ceremonies with presentation of colors and the National Anthem sung by Anita Williamson

12:00   Veteran’s Hour – to honor our servicemen and women with special Doughboy presentation

1:00     Michael Crisp – guitar and singing to oldies and contemporary

Joyful Noise is a Southern gospel group from Sunny View. They desire to share the gospel through song. The group centers their lives around the old time way. They attend Zirconia Missionary Baptist Church. Joyful Noise members are Chris Hodge, Morgan Hodge, Anna Hodge, Ian Campbell and Luke Phillips, and will feature Tyler Dodson on the bass.

Patrick Ballard, the Guitar Blues man from Flat Rock, N.C., will perform a blues set as well as a solo banjo. You will hear the sounds of Jimmy Reed, Fred McDowell, Lightning Hopkins, John Lee Hooker, Leadbelly as well as his original compositions.

Michael Crisp will be singing and playing guitar to music he grew up with and loves from the late 60s and early 70s. He covers songs by artists such as the Beatles and performs originals as well.

Meghan Woods is from Hendersonville, N.C. and lives on her family’s farm. Her passion for singing began at a very early age. In 2014, Meghan teamed up with Inspirational Country Music’s Male Vocalist of the Year, Tommy Brandt of Beyond the Music Promotions, to begin working on her debut album, “Hang On.” The song “Hang On” topped the charts at #5 for inspirational country music radio stations. Over the past several years Meghan was honored to be nominated for many awards including the 2014 Inspirational Country Music Awards New Artist of the Year and Youth in Music awards.

Red Dog and Silas & Lecretia Robinson with the Thunder Road from Spartanburg will be performing Country, Southern Rock, Gospel and originals. Their rounded out playlist will leave you wanting to hear more!

Loaded Toad
Loaded Toad is a cover band that formed in 2011 as friends who got together to play a few benefits and turned into a full time rock & roll band! If you enjoy The Allman Brothers, Marshal Tucker, Bob Seger, Cream and Lynyrd Skynyrd, you will enjoy Loaded Toad. The band members are Hicks Koon – guitar, Randy Simpson – bass, Johnny Edney – drums, and Joe Frady – member emeritus.