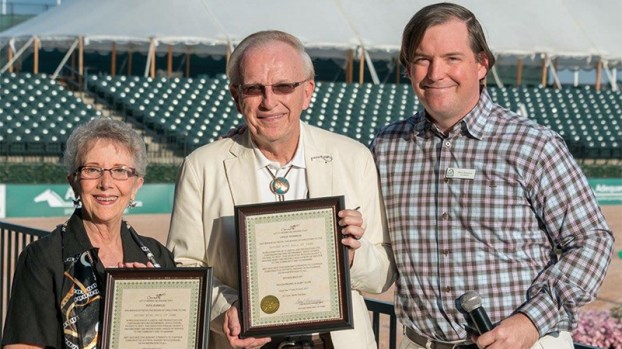 The award read in part, “In recognition of a useful and productive life, continuing beyond retirement, while others paused to rest. These dedicated persons caught a ‘second wind’ and began a new career of service to the community and to mankind.”

Vince and Rita moved to the Thermal Belt area in 2011 from Yardley, Pa. Vince worked for United Engineers, Aqua Culture Industries, and delivered cars for Ford Motors. He received his BA from Strayer University. He enjoys fishing, golf and deer hunting and has an interest in horseback riding. Rita worked as an administrative assistant at Verizon/Bell Telephone for 30 years.

Vince has been a volunteer at the Tryon Fine Arts Center in many capacities from bartender, usher to assisting in the audio department. With the Tryon Riding & Hunt Club he has been a horse show volunteer, jump judge for horse trials, Steeplechase gate security and supervised horse cool-down stations at eventing shows.

He has given the Columbus Fire Department audio visual support, crowd control during emergencies, helped with traffic control and organized the fire hydrant mapping project. He has been a volunteer every Saturday evening as a volunteers manager, provided security at the Legends Club and provided golf cart tours at the Tryon International Equestrian Center. Vince has also been a volunteer at FENCE.

Rita has been a volunteer at FENCE at its horse shows, served as a jump judge for horse trials, and worked with the hospitality committee providing lunches and beverages to volunteers. At the Tryon Riding & Hunt Club she has been a horse show volunteer, a jump judge for horse trials, serves on the hospitality committee and at Steeplechase she has been on gate security and supervised horse cool-down stations at eventing shows.

At Tryon International Equestrian Center she volunteers every Saturday evening as a hospitality leader and greeter. She also manages other volunteers in various positions around the stadium, hands out the Order-to-Go for all events and manages Lost & Found. Tryon Fine Arts Center finds Rita as a volunteer bartender, greeter, usher or available for whatever else is needed.

Her hobbies are knitting, zen coloring, fishing and golfing. For a period of time she designed hair fashion pieces for Nordstrom’s.

They would both like to be remembered for their community service and making a little bit of difference.  Vince is especially proud of his work with the Columbus Fire Department.

Second Wind Hall of Fame is a 501(c)(3) organization that seeks to identify those outstanding volunteers over the age of 60 who contribute so much to the quality of life in our community.