Saluda approves resolution in support of Rails to Trails 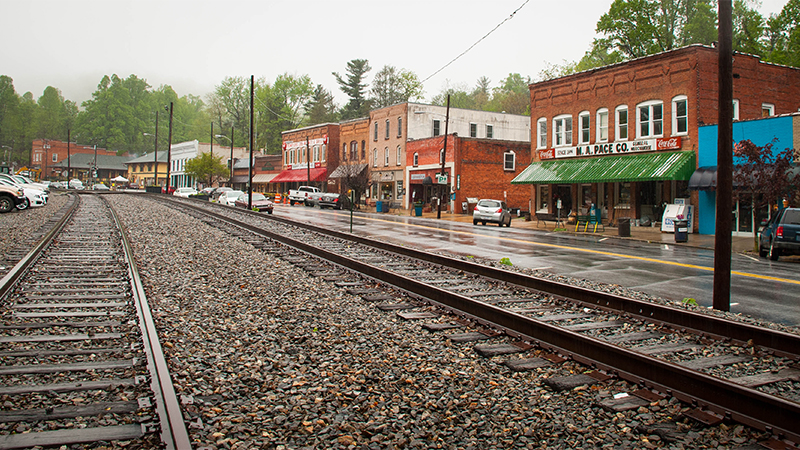 Could a Rails to Trails effort be successful between Landrum, S.C. and Saluda, N.C.? Saluda City Council members heard a presentation Monday night that addressed residents’ concerns, questions and misconceptions on Rails to Trails efforts. Saluda is pictured here, with the Norfolk Southern rail lines running through the heart of downtown. (Photo by Shay Carlson)

SALUDA – The City of Saluda approved a resolution this week in support of the Rails to Trails effort between Saluda and Landrum.

The Saluda Board of Commissioners met Monday, May 8 and approved the resolution after hearing a presentation regarding Rails to Trails projects from Hunter Marks, a registered landscape architect, president of the Hendersonville Rotary Club, a former railroad employee and a key player in the Ecusta Rail to Trail effort.

Marks answered some questions for the city, including what a rail to trail is, what impacts a trail has on towns, what is rail banking, who pays for the trail and who maintains the trail.

Marks said trails do many things for communities, including expand the tax base, attract people and families, stimulate economies, create jobs, attract industry and promote tourism.

Marks said he is involved with the proposed Ecusta Trail, which will utilize the rail corridor that connects Hendersonville and Brevard, proposed at 19 miles. The trail would pass through Laurel Park, Etowah, Horseshoe and Pisgah Forest.

“The railroad is not ready to give it up yet,” Marks said. “But we’re getting prepared for when they do and we’re here to talk.”

Marks said the biggest problems faced are people’s misconceptions about a trail, with the obvious being who is going to pay for it. The Ecusta Trail is estimated to cost $17 million, he said, but there are state, public and private grants and municipalities to help pay for it, plus the trail will not be completed all at once.

“You split that up into manageable pieces and it’s very doable,” said Marks.

The other concern is that the trails aren’t safe, which Marks said is not true. He said other municipalities with trails said the trails are community patrolled because people are always on them.

The Town of Tryon recently considered approving a resolution of support, but several nearby property owners to the railroad tracks attended a meeting in opposition. Property owners said they feared crime, people trespassing on their property, costs for a trail system and costs to police a trail system.

Landrum Mayor Bob Briggs asked both Tryon and Saluda to support the trail. Tryon Town Manager Zach Ollis met with concerned property owners but the town has not yet considered the resolution again.

Marks explained rail banking as well, saying that in the 1980s the rails were not in good shape so the railway came up with a provision that if the tracks are sold, the railway can get them back in the future if they ever needed them.

Marks said if Norfolk Southern, which owns the tracks between Saluda and Landrum, decided they want to abandon the line, they will come to a group and say they’d like to rail bank it. The group would purchase the line, but in the future, if any railroad wanted to open the line they could come back and open the line, he said.

Saluda Mayor Fred Baisden said the only way it will go back to adjacent property owners is if the railroad totally abandons the line. Marks said it will never get to abandonment, as that is what rail banking is designed to prevent.

Another thing a trail does, according to Marks, is become a magnet for business.

“People want to live by these things and developers know this,” said Marks.

He encouraged Saluda Council to research other trails and their economic impact.

Baisden said Saluda hears from people all the time that they don’t want people to ride bikes across their property.

A woman in the audience said property owners who are concerned about people being on the trails should take comfort once they are trails. She said this is a community where people are watching for safety, and the rails as they stand are open for “more sketchy people.”

Marks said what the studies show is that safety and crime are not issues on these trails.

Saluda City Attorney Jana Berg asked if equestrian traffic could be allowed on the trail.

Marks said that would be a decision for the consortium that acquires the rails but it is possible.

Marks also said the ownership of the trail could be different entities. The Virginia Creeper, for example, is owned by two towns, Abington and Damascus in Virginia. The towns treat the maintenance of the trail just as they do their parks. Marks said the trail is mowed a few times a year, leaves are blown and occasionally benches are painted, etc.

Commissioners unanimously approved a resolution (full text below) that was drafted by Berg specifically for Saluda. Once commissioners approved the resolution, the audience applauded.

Resolution in support of the efforts of the Saluda Grade Trail committee to covert the Norfolk Southern Rail right-of-way between Saluda, N.C. and Landrum, S.C. to a Rails to Trails Project should this right-of-way become retired or rail banked

WHEREAS, the economies of Saluda, NC, Tryon, NC, and Landrum, SC were built by the existence of the railroad; and

WHEREAS, the scenic Saluda Grade, being the steepest standard track rail grade in the United States, is one of the most famous, beautiful and historically significant rail corridors in the country: and

WHEREAS, Norfolk Southern Corporation’s rail bed between Landrum and Saluda (line W) has not been utilized for rail traffic since 2001; and

WHEREAS, said rail is unlikely to be put back into service in the foreseeable future; and

WHEREAS, conversion of said rail bed into a recreational trail could:

• Provide a permanent recreational exercise facility for residents and visitors;

• Serve as a magnet for clean, environmentally friendly tourism for the region;

• Preserve the scenic Saluda Grade, one of the most famous and historically significant stretches of rail line east of the Mississippi river;

• Give Norfolk Southern Corporation a means to renew, rejuvenate and reinvigorate the economies of communities which were originally built by its corporate predecessor, Southern Railway;

• Promote the health, fitness and welfare of all who use it;

• Provide alternative safe healthy access to schools and parks along the trail;

• Enhance the quality of life of residents and visitors; and

WHEREAS, the Saluda Grade Trail Committee has been formed for the purpose of accomplishing such a conversion.

NOW, THEREFORE, BE IT RESOLVED that the City of Saluda, North Carolina expresses its support for the Saluda Grade Trail Committee and its mission, and pledges its active cooperation in accomplishing that mission; and

BE IT FURTHER RESOLVED that the City of Saluda encourages, challenges and invites other governments, organizations and individuals to likewise support the mission of the Saluda Grade Trail Committee in the hope that said Committee will accomplish said mission with all due speed; and

BE IT FURTHER RESOLVED that the City of Saluda expresses its recognition of and appreciation for the contributions of Norfolk Southern Corporation and its corporate predecessor, Southern Railway in creating, building and maintaining the economy of our region throughout virtually the entire 20th Century; and

BE IT FURTHER RESOLVED that the City of Saluda entreats Norfolk Southern Corporation to look kindly upon the mission of the Saluda Grade Trail Committee as an opportunity for Norfolk Southern to repurpose its unused rail line and thereby help to re-create, rebuild, and remake said economy as it moves forward through the 21st Century.

This resolution shall become effective immediately upon its adoption.

Done in a regular meeting duly assembled, this the 8th day of May, 2017.